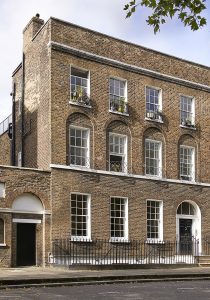 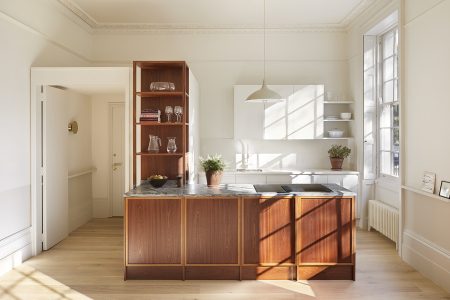 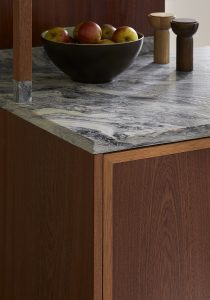 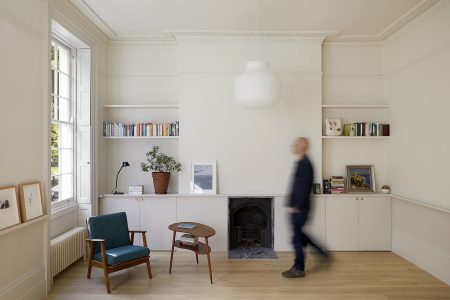 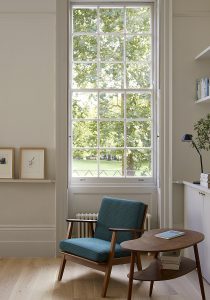 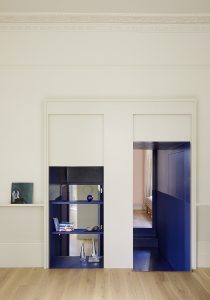 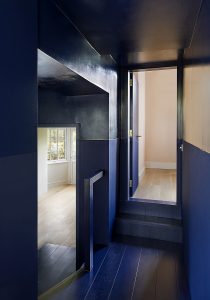 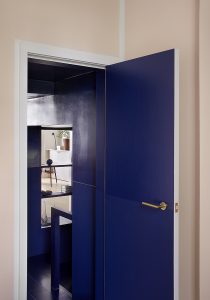 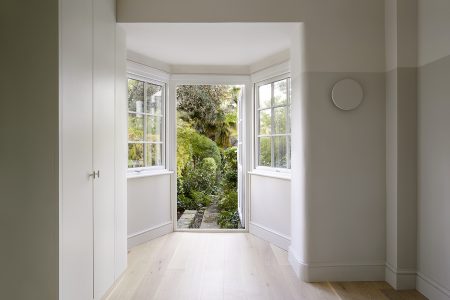 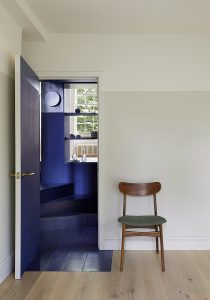 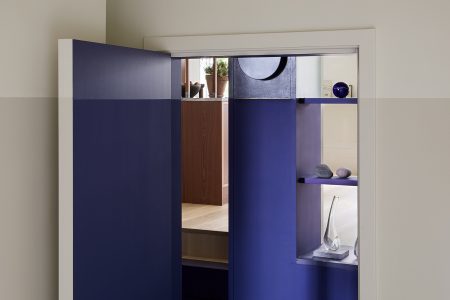 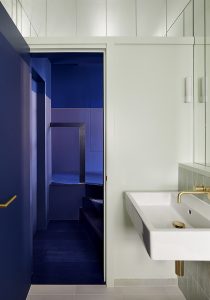 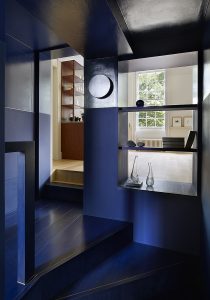 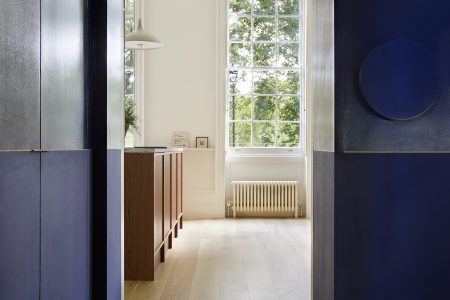 Beautifully sandwiched by green space, this ground floor apartment boasts views of Highbury Fields to the front and access to a private and luscious garden to the rear. The previously existing layout interfered with any connection between the green spaces and divorced garden from living space – alfresco dining discouraged and trips between fridge and deck chair obstructed.

Recently completed, Patalab's refurbishment addresses this separation whilst responding to the grade II listing and working within constraints such as structure and budget. We therefore employed small interventions and explored surface treatment to improve the flat’s cohesion and uncover its verdant potential.

Located on the upper ground floor of a North London Georgian townhouse, the Highbury Fields Apartment was a patchwork of spaces. With the main living space and flat entrance situated in the historic front half of the property, the bedrooms and bathrooms are 20th century additions to the rear, likely a legacy of when the house was divided into flats. Also inherited from this time in the property’s history is a small staircase that stitches these two moments together. With an irregular volume (negotiating level change and navigating restricted headroom below the common parts staircase) this space was also dingy as natural light was trapped behind internal doors. This was a space to move through quickly with a room on the other side of the house in mind, the transition was unenjoyable.

Lack of decoration and lower ceilings characterised rooms in the lower level whilst the front room benefitted from high ceiling and historic mouldings. Despite these grander attributes the original Georgian proportions of the living space was interrupted by a modern entrance lobby clumsily eating into the living space’s internal area. This lobby also split the staircase from the living space, forming a further barricade between front and rear of the flat.

Our first step to improve the flat was very practical – convert what was the second bedroom into the master so that access to the garden could be via study/guest bedroom. This rearrangement meant that the master bedroom could separated and private whilst the door to the study/guest bedroom could be kept open most of the time. We recognised that a visual connection between living space and garden would be the most efficient (and cost effective) way to unite these spaces. This connection would work both ways and equally create a view of Highbury Fields from the rear rooms - almost dual aspect bedrooms (if you keep doors opened).

Perhaps it was an association with framed views in a beautiful garden, we decided to look at Barbara Hepworth’s sculptures for inspiration. A particular reference we found resonated with the flat was ‘Rock Face’, a later work carved out of Ancaster Limestone.

In this piece Hepworth bases her carvings on the innate qualities of the natural material. The rectangular stone is split, with the top half grey-blue and the lower section is red-brown. A central dimple illustrates how engrained this division is and it continues even where material has been removed. Appearing to slump when carved away, the lower colour dips within this concave space and the stone reacts to Hepworth’s cuts – the red-brown half is suspended by her choice of where to create facets and carvings. This use of existing conditions animates the solid material.

Whilst the regular shape of ‘Rock Face’ accentuates the fluid movement of the stone, the steady line of a datum in Highbury Fields Apartment transcends the different levels and ceilings heights across the rooms that form the route between living space and garden.

At kitchen counter-height in the living space and picture rail height in the bedroom, the datum is articulated in differences in paint colours, built-in joinery and a brass inlay that stitches the upper and lower halves of the staircase.

Using light neutral colours in habitable rooms, the paint treatment dramatically changes to dark blue in the central staircase. The depth of colour in this space allows light from either direction to be reflected, and although it’s very striking when you stand in this space, the darkness of the tone increases its visual neutrality and you look through it to the view of green space beyond.

Everything aside from the brass datum is dark blue in this area. Not only are the walls painted blue (with matte paint below and gloss above the brass) but the flooring, which is the same timber as everywhere else in the apartment, is stained the same colour. Creeping beyond the thresholds of the doors, the blue flooring continues into the mainly neutral-coloured rooms so that when doors are open, the liminal space extends to bring views of greenery closer.

The division in kitchen treatment also helps to mask the lobby, as the peninsula is treated as a central piece of furniture whilst the wall-mounted units are sprayed to blend in with the wall colour. Sitting in front of the lobby, the peninsula includes panelled Sapele-veneered doors/shelving and a stone countertop. Small stone plinths elevate the shelving above potential liquid spillages and enthusiastic cleaning. The same stone is repeated on the fireplace heath and is a blue-colour to compliment the staircase colour.

Despite Highbury Fields Apartment not being a large flat, there are many bespoke details. Lighting is all very carefully selected to compliment the design and high-level mirrored panelling in the bathroom works with the varying green shades of the tiling to create a shimmering effect that substantially increases the light levels and sense of space.

This is our second flat in the same Georgian building for the same client, after refurbishming Highbury Apartment in 2018/19. Both refine existing conditions to create beautiful residences.

"I’m very happy with the flat and really appreciate all the careful thought that went into it. The conceptual ideas are so strong and truly shine through in the space without overwhelming it. It’s rare to find a place that is both intellectually stimulating while being physically comfortable and I feel that’s really been achieved here - major kudos are owed to Uwe and Dora." 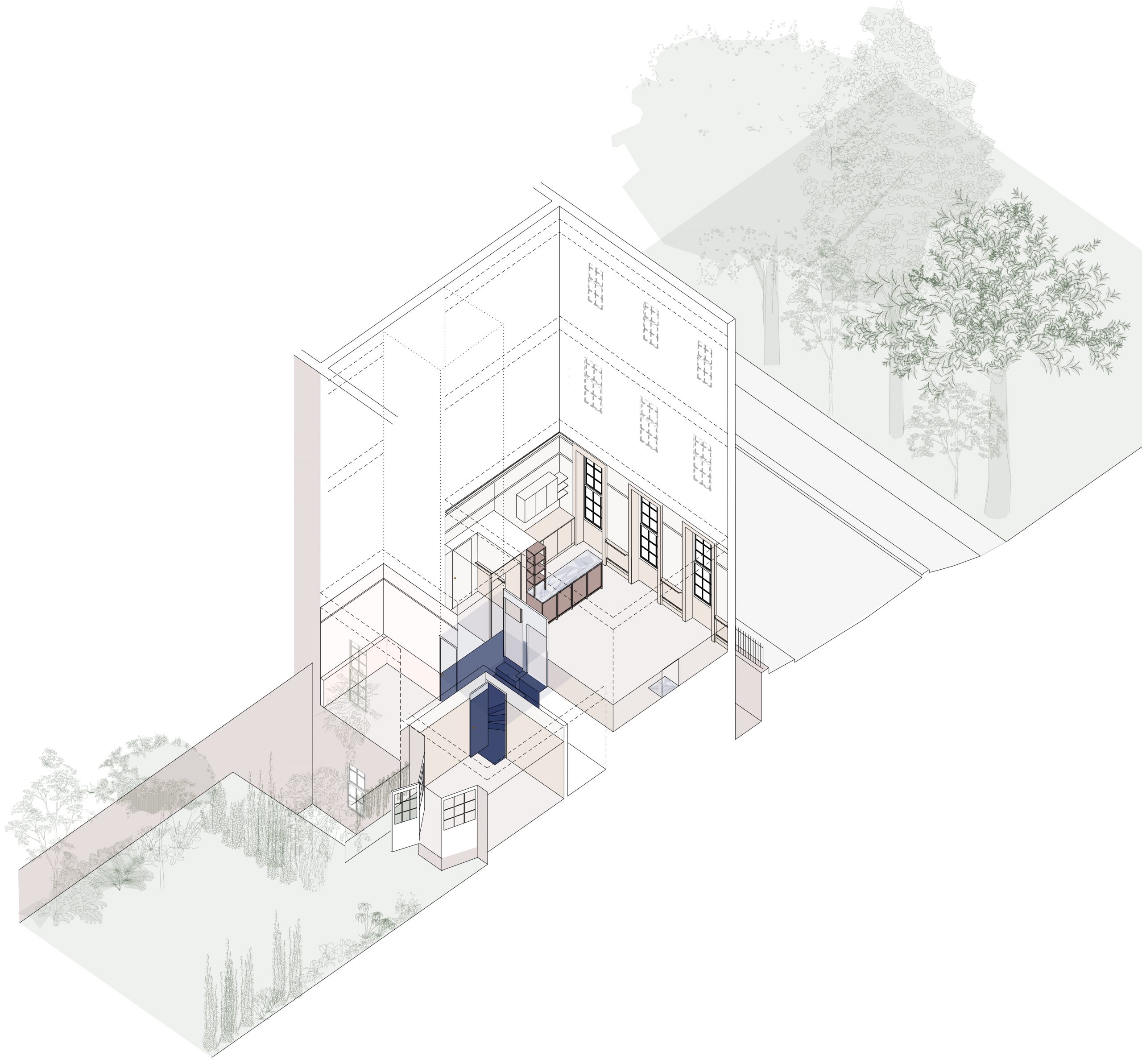 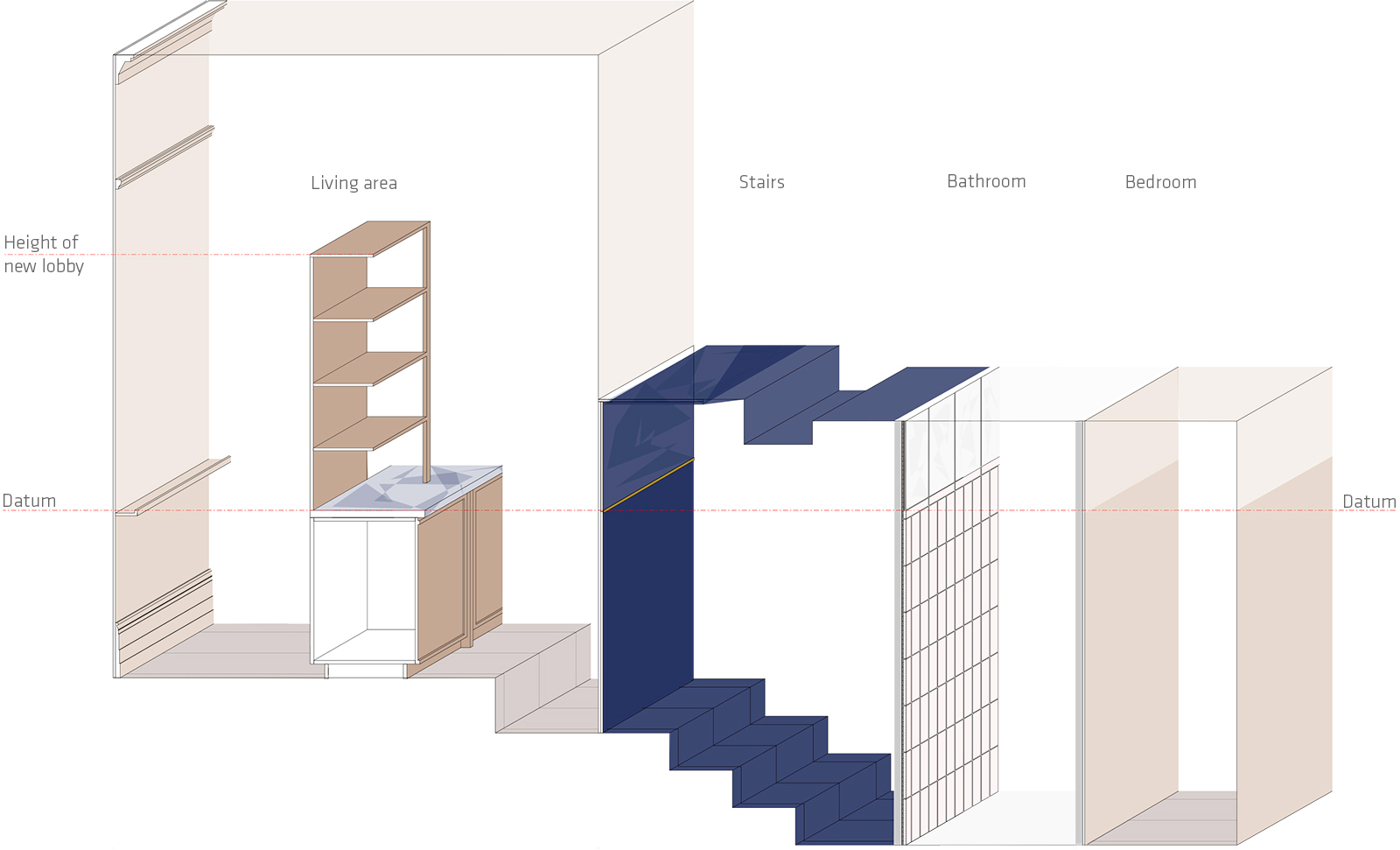 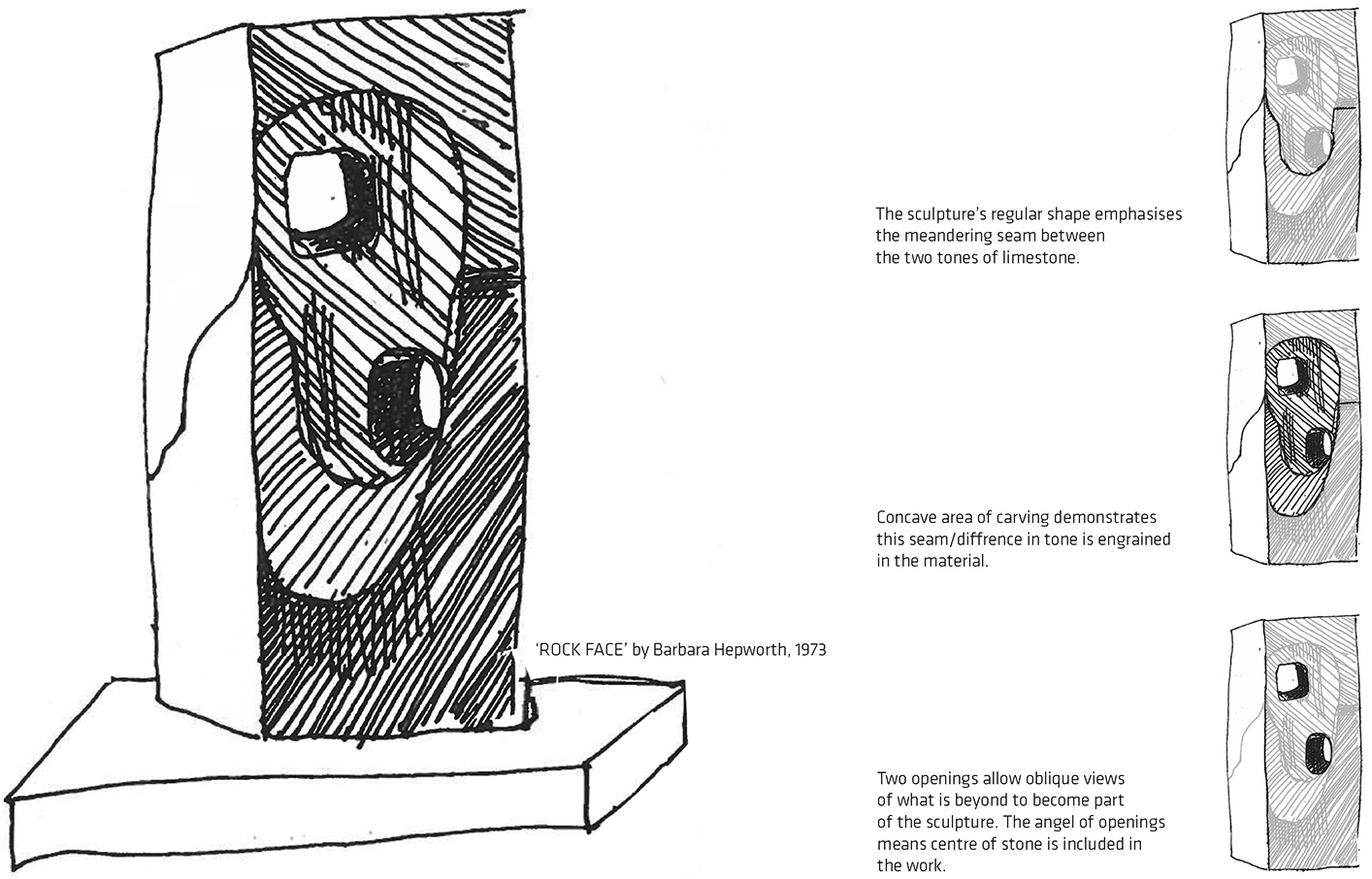 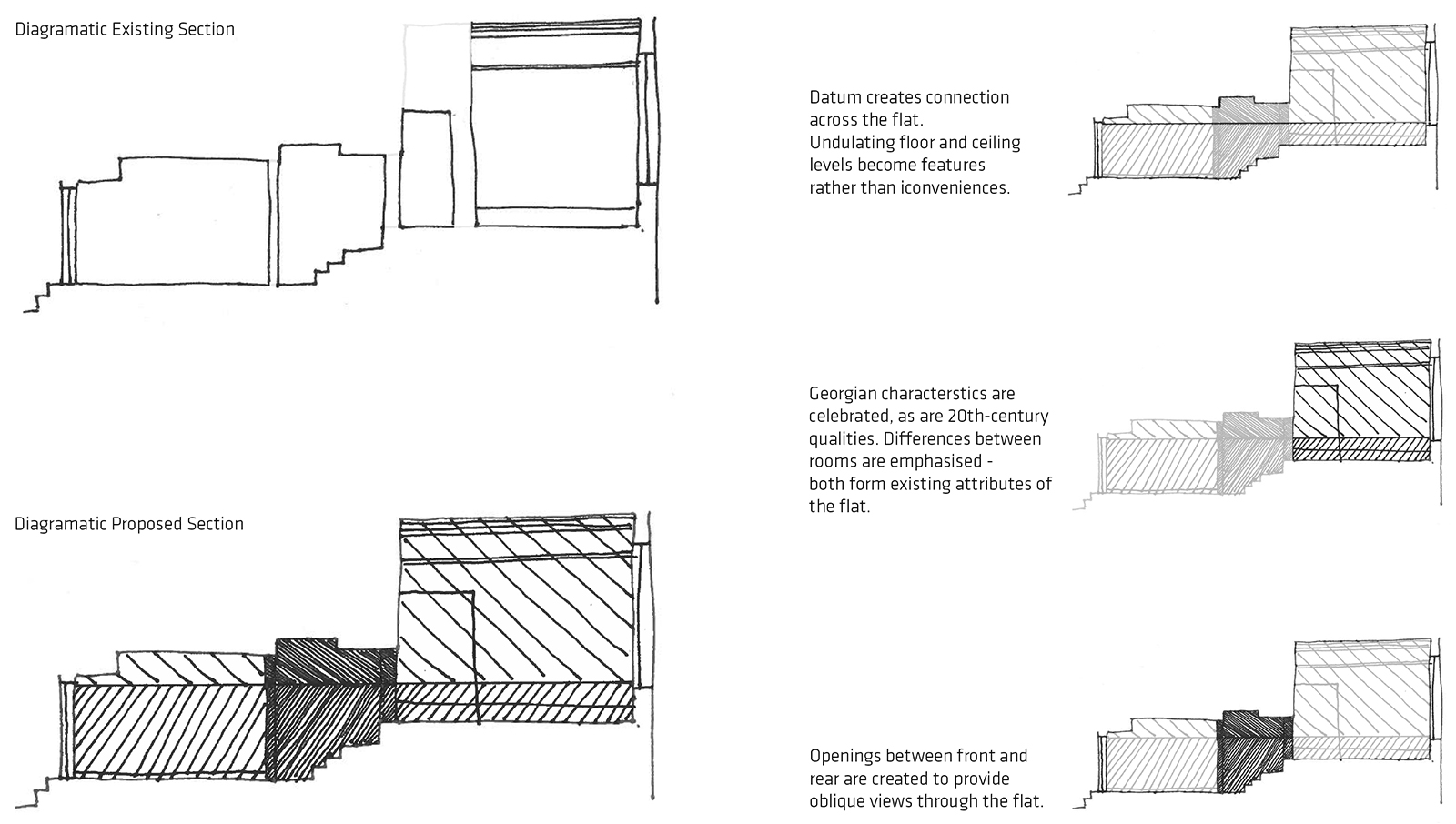 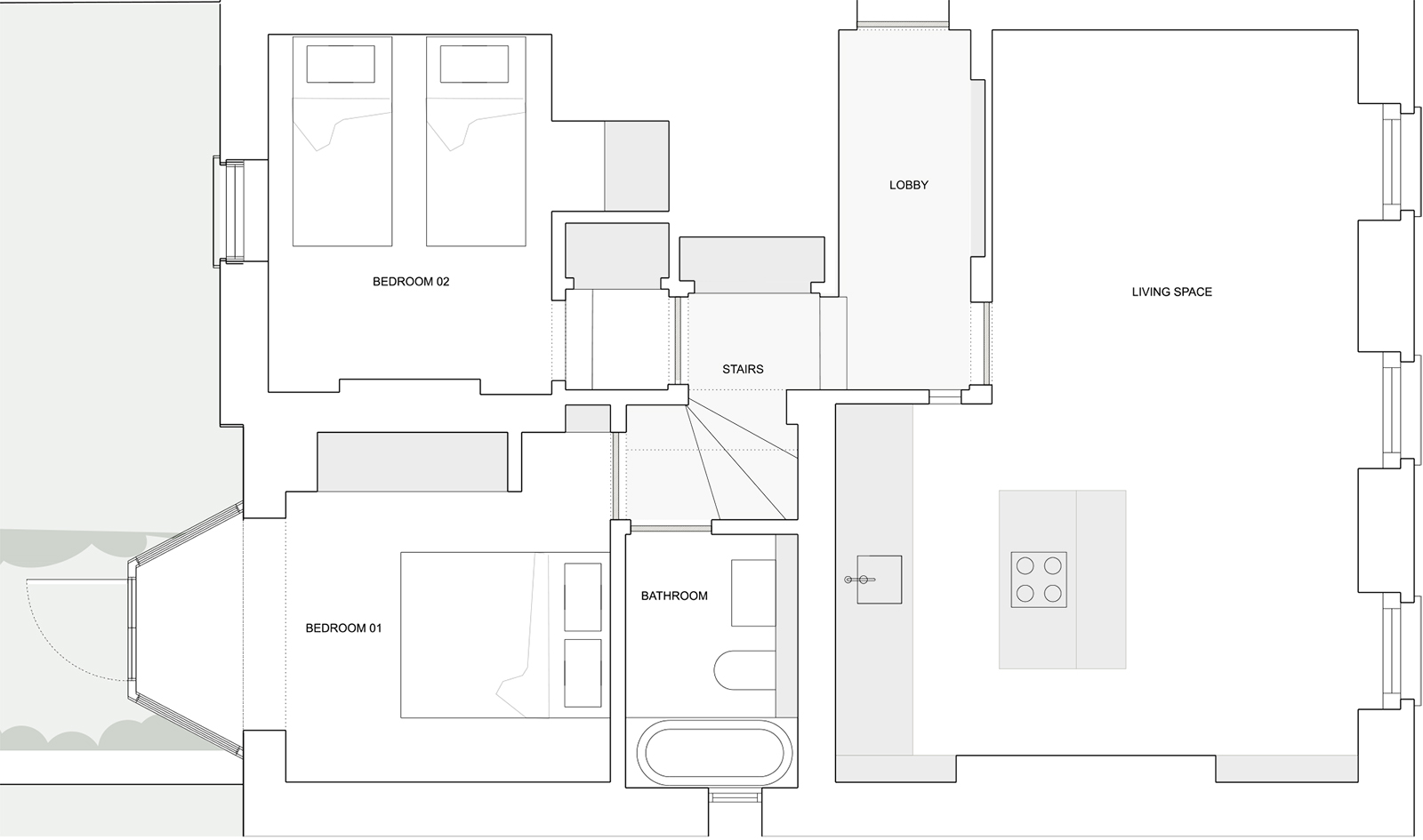 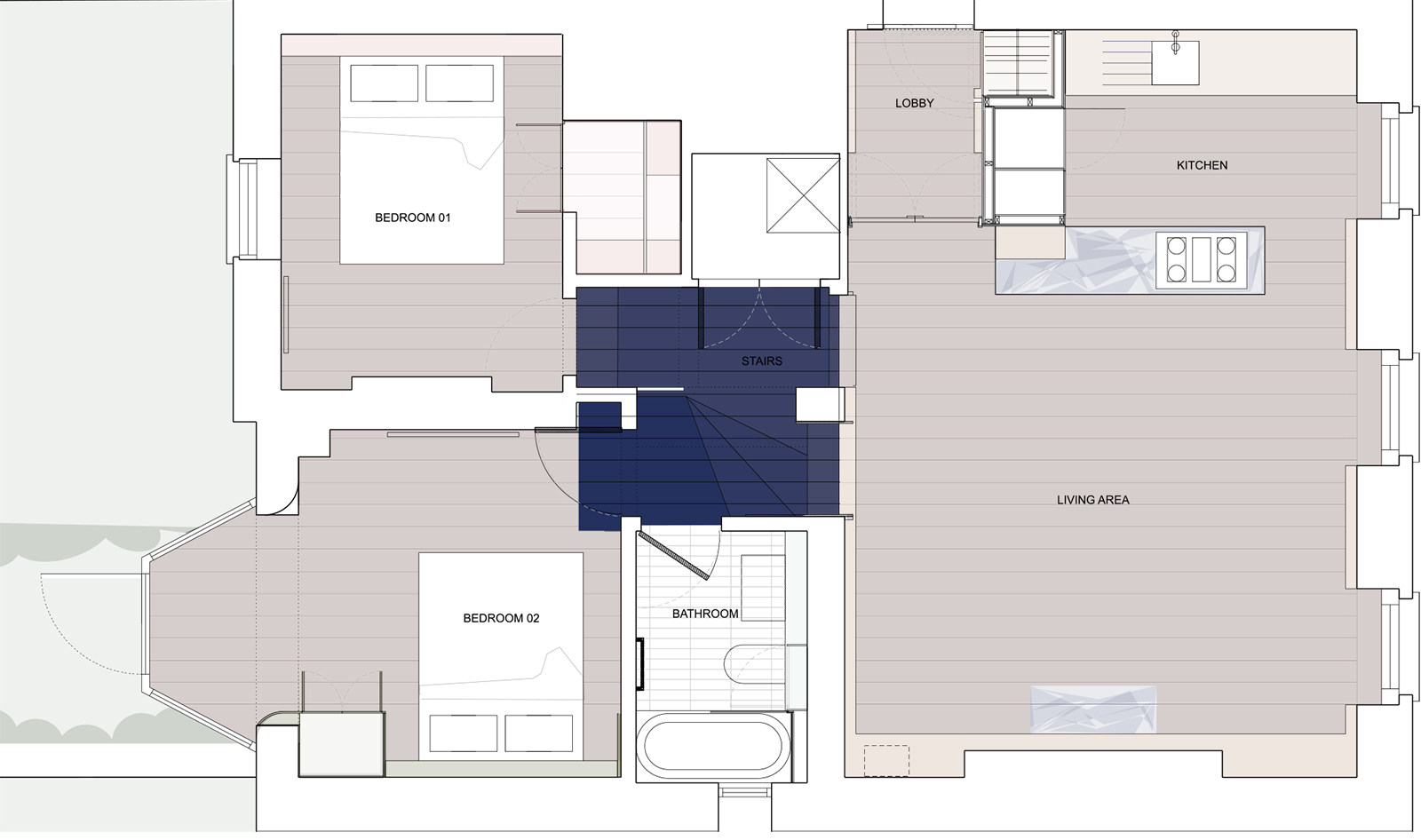 "The conceptual ideas are so strong and truly shine through in the space without overwhelming it. It’s rare to find a place that is both intellectually stimulating while being physically comfortable and I feel that’s really been achieved here - major kudos are owed to Uwe and Dora." 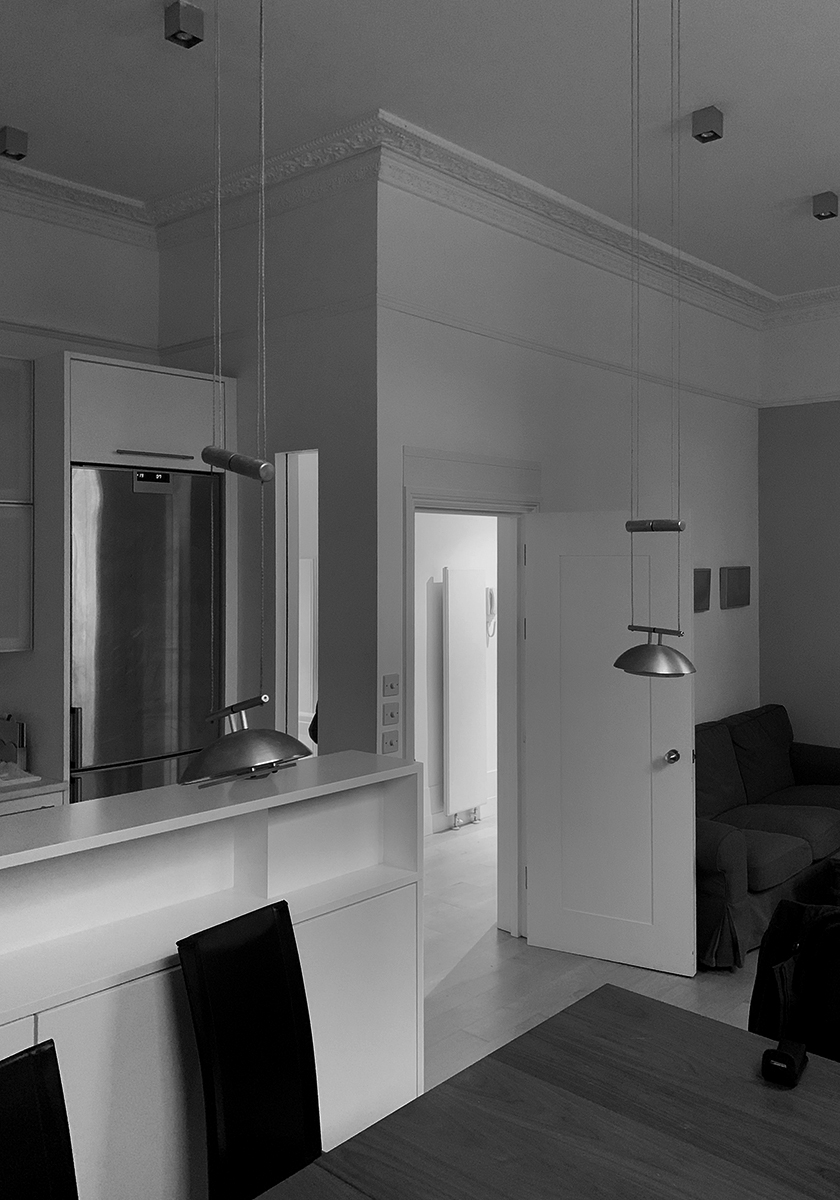 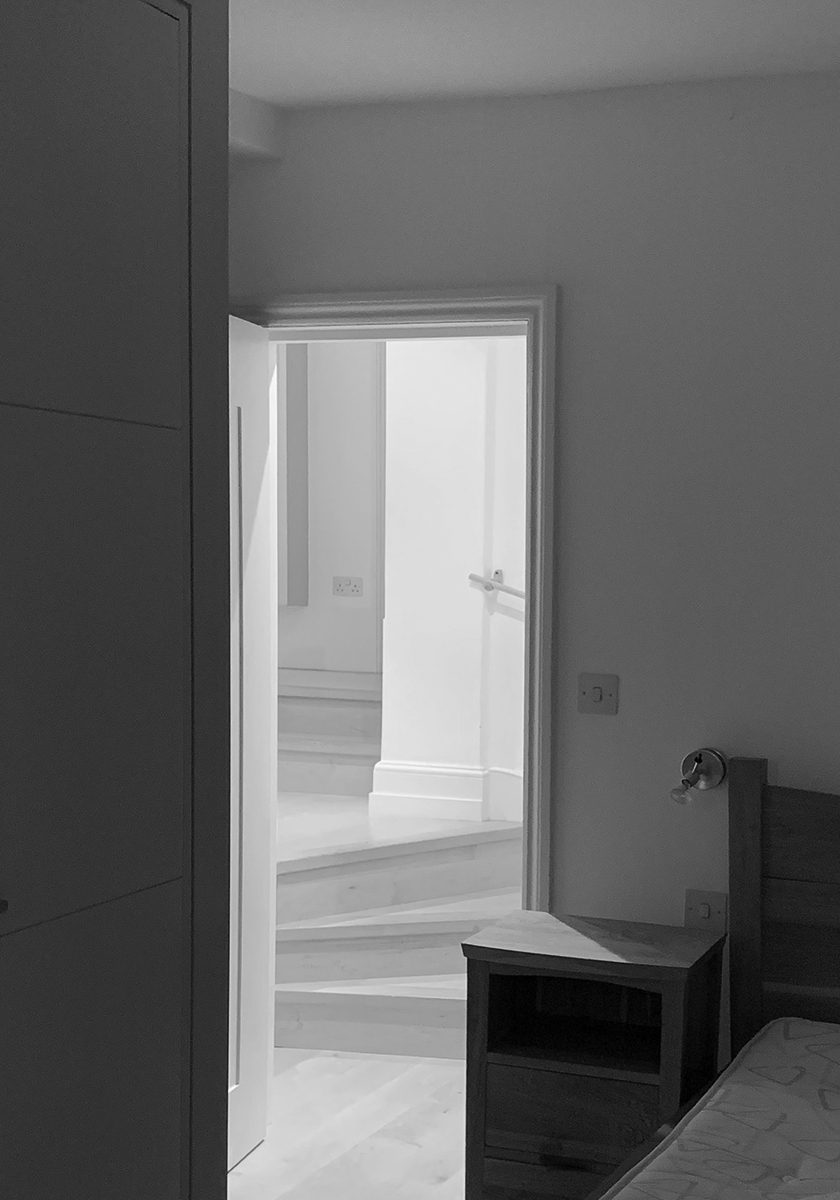 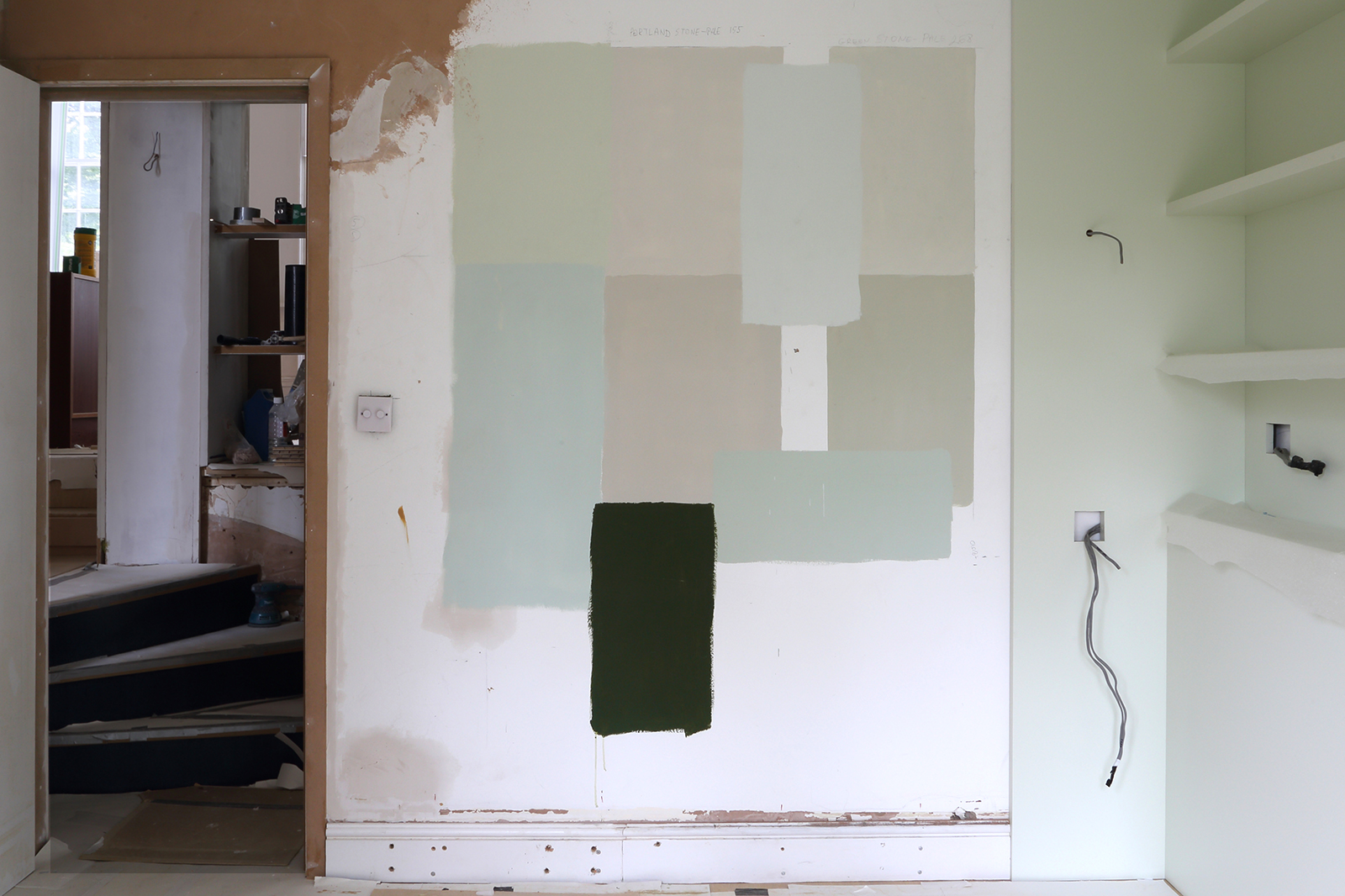 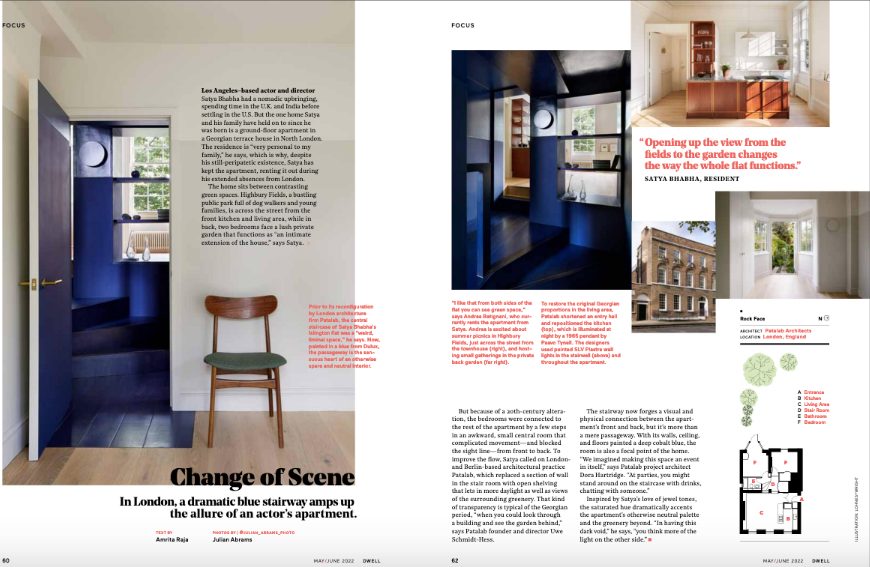