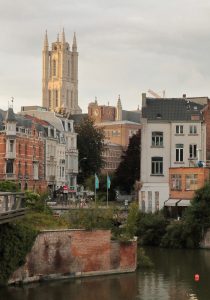 Our experience through three tours of East Flanders' Capital 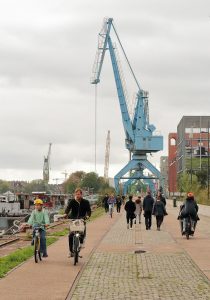 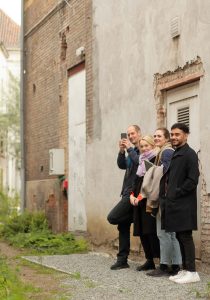 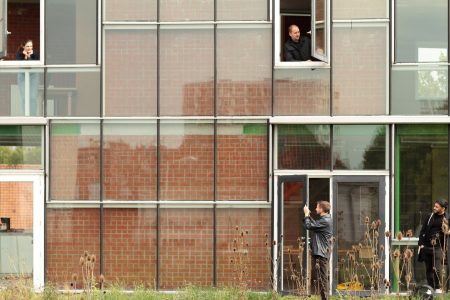 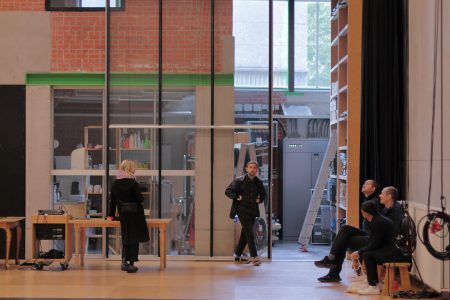 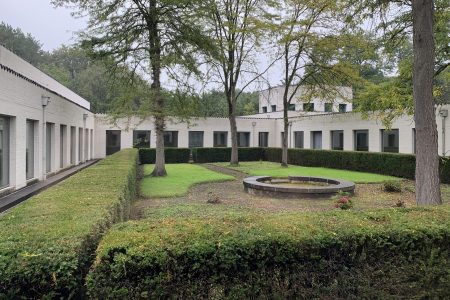 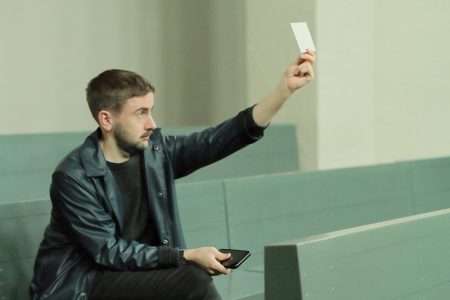 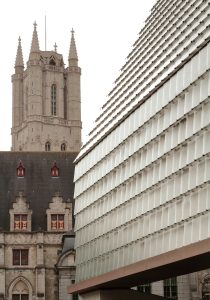 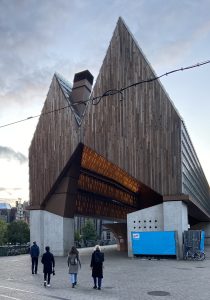 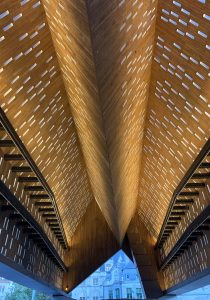 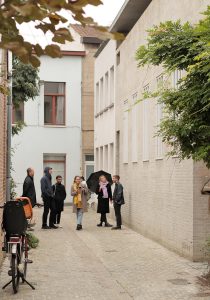 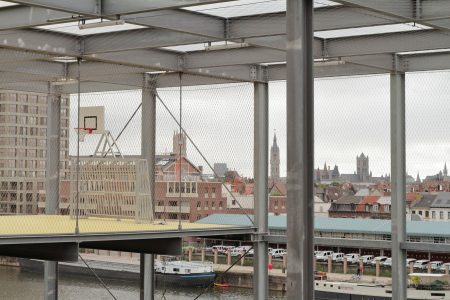 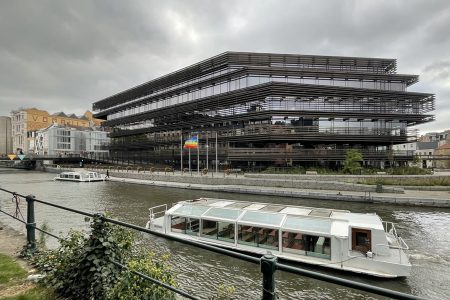 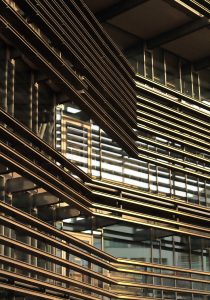 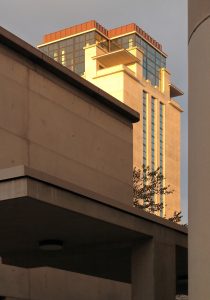 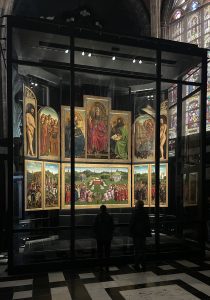 Our London studio has recently returned from their first trip away as a practice since the pandemic. Bringing along new staff who haven’t had a chance to go on the office trip before. Travelling via the Channel Tunnel to the Belgian city of Ghent we were hoping to visit inspiring contemporary and modern buildings in amongst the historic city. Our four-day trip could be summarised by three tours.

Expecting to be given a tour of the ballet company building designed by architecten de Vylder Vinck Taillieu, we were instead met by the building manager of the complex. After a short greeting he unlocked one of the buildings and said: “Just send me a text when you’re done and I’ll come and lock up”. Free roam. We should have known there would be this relaxed attitude when every email by him was signed off ‘shoot’!

Inside, the building was equally relaxed, matched, almost as an oxymoron, by the rigour of the construction. Every element in the building remains exposed and easily read. Brick, concrete, steel painted green form an open structure, seen form the outside through a wall of windows set slightly in front. We were impressed by the huge sliding door in the main studio room. The door; two storeys high, made from off the shelf aluminium profiles; hung lightly off the wall and could easily be moved by a single person - Simon and Jordan both had a go.

Such was an exemplary part of the whole building - familiar elements, i.e. aluminium windows - reworked into less familiar ways. Elsewhere, turned timber spindles hung from lengths of wood which in turn were fixed to acrow-props set between the ceiling and the floor. Outside, cement shingles, familiar upon many gable walls in Ghent, clad many of the walls. In large gashes across the facades they have been removed revealing the timber batons beneath to allow climbing plants to fill the gaps.

We were slightly stressed. To get to Roosenberg Abbey by Dom Hans van der Laan we had to be up early to catch a train and a bus. Maps seemed to suggest that the final part of the journey would be a half hour walk via a farm track. There had been a constant drizzle of rain from the sky since the evening before.

This turned out to be the perfect way to approach the building. The woods surrounding the abbey were slightly thickened with mist. The white painted facade of the building at the end of the track made the building disappear from our perception - was that the building or had the mist really closed in over there. Phillipe, the building manager, caretaker, expert, was waiting for us. At our request to be told everything about the abbey, such was his knowledge, he prepared us for a very long tour.

As opposed to the colourful materiality of Les Ballets, this much more austere building consists of white limewashed brick, concrete lintels, and dark metal windows. Instead Hans van der Laan’s restrictive, and rigorous, use of proportion and simple thoughtful detailing created an amazing complex work where everything from the chairs and wardrobes and habits for the nuns, to the siting and size of the building were connected through geometric ‘plastic’ proportion.

Patalab was invited to visit the office of Robbrecht en Daem architecten in the north west of the city, outside of the historic centre. We arrived at a large slatted timber gate on a residential street and once it slid open we were revealed the complex inside. After admiring the bent timber trusses of the structure for a short time, Johannes Robbrecht met us, he is the youngest director of the practice and the son of the two founders. Johannes took us into the glass and timber studios that run the length of the structure.

The huge timber roof of a former timber yard had been given over to extensive amounts of sheltered outdoor space - space for a garden with trees, a reflecting pool, a sauna, and space for everyone at the practice to lock their bikes. We were impressed by the generosity given to this huge amenity space next to the office of the two architects on the site.

As we left we asked “What do you think is the most important thing to see while we are in Ghent?”  “The Van Eyck altarpiece of course!” - relief and exhalation - we had visited St. Baaf’s that morning and already viewed the incredible work. Johannes was much to humble to recommend his own practice’s work. Designed in collaboration with Marie-José Van Hee architecten, the Market Hall is a large but precise intervention into the townscape of the city centre. Simple in plan, it sits in the open space between the historic belfry and Sint-Niklaaskerk. Through this it forms five new spaces; one for each side of the structure and another beneath the huge roof - more generosity through shelter and enclosure.

This only accounts for some of the buildings we experienced during our office trip. A visit to the city’s Boekentoren by Henry van der Velde where we learnt how the exterior concrete had to be removed down to the reinforcing mesh with water jets - causing it to be one of the loudest building sites ever recorded. At the Melopee School overlooking the deindustrialised port we explored the neo-industrial structure of the playground and sports hall. At De Krook, by RCR Architects & Coussée Goris Huyghe architecten, another library, we sat and had beer and bread pudding while looking over the city roofs toward the towers of the cathedral and belfry. We spoke to locals who recommended excellent restaurants. We enjoyed local Belgian beers and meals with mountains of frites and perfect mayonnaise. 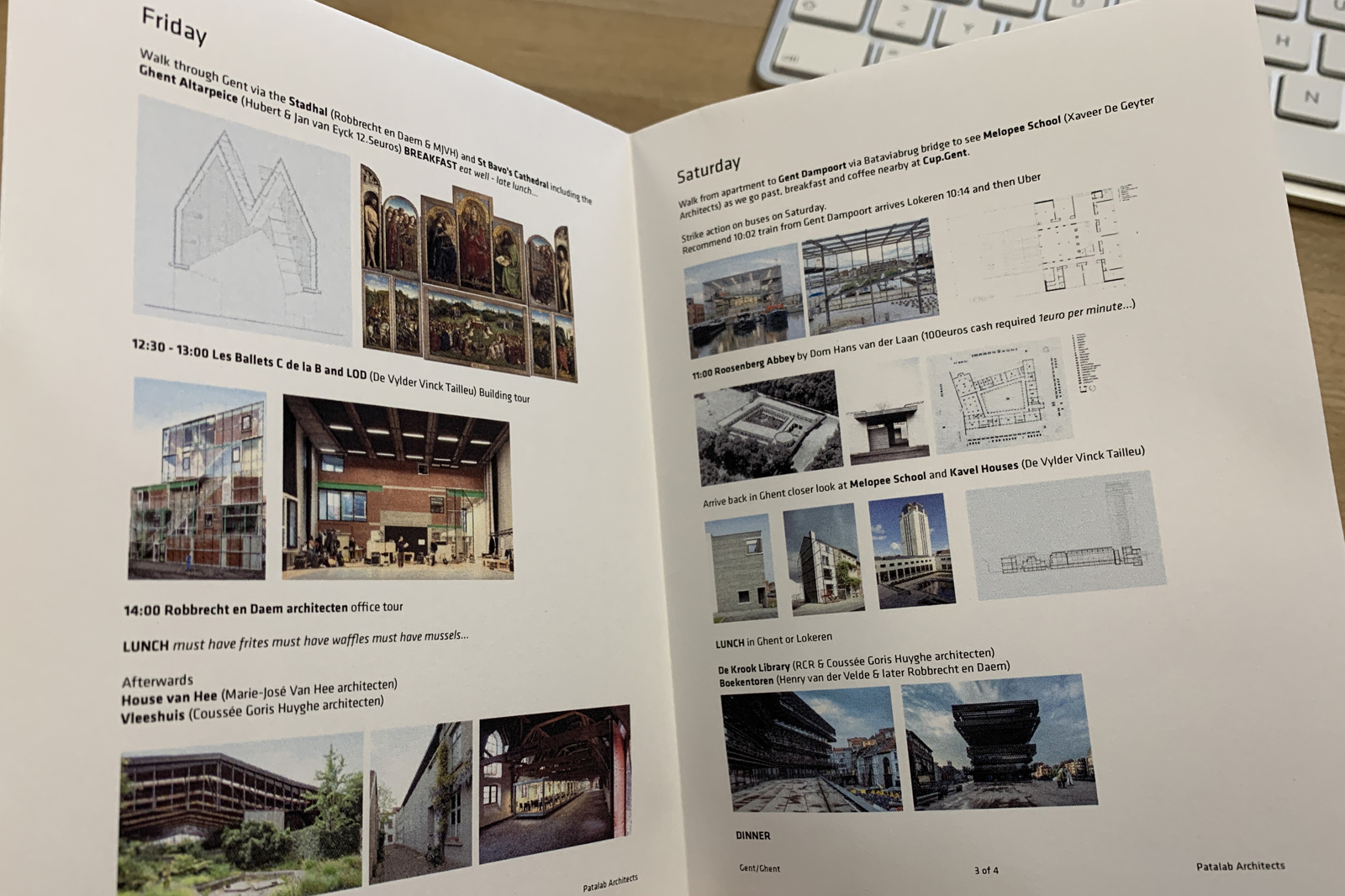 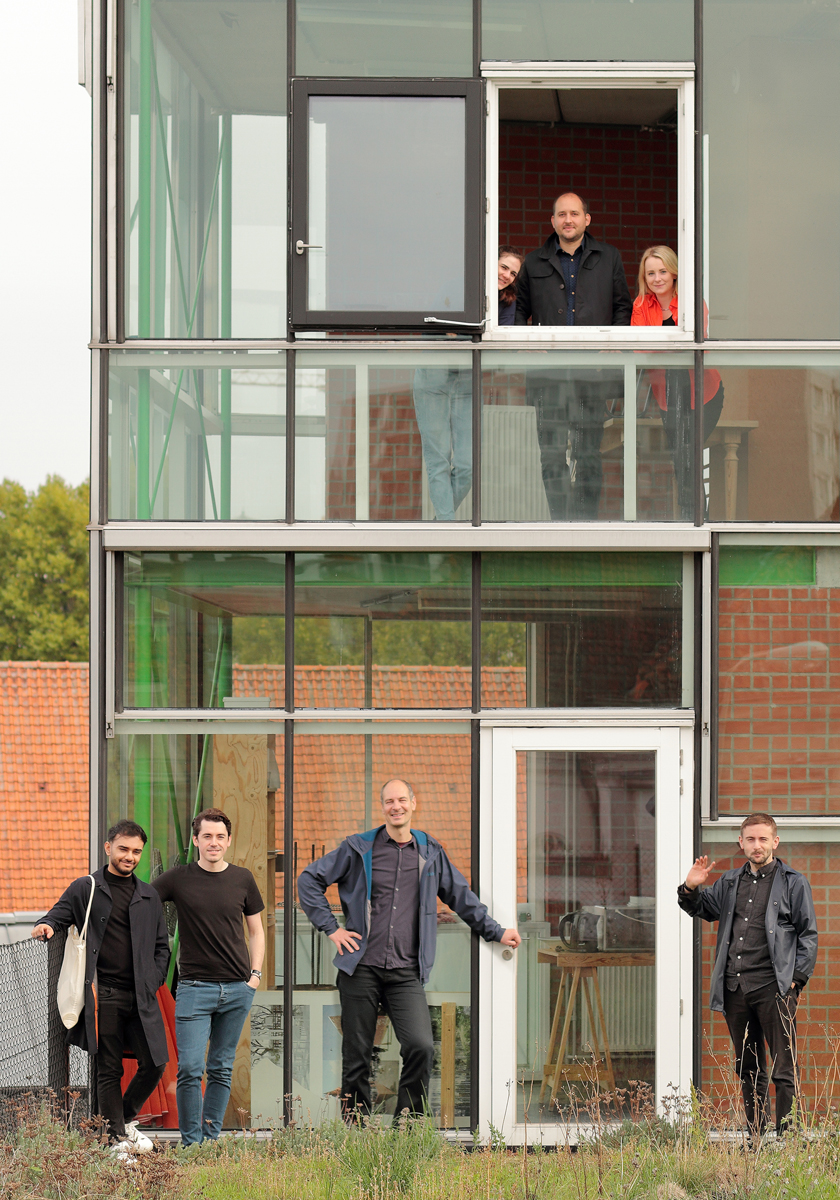 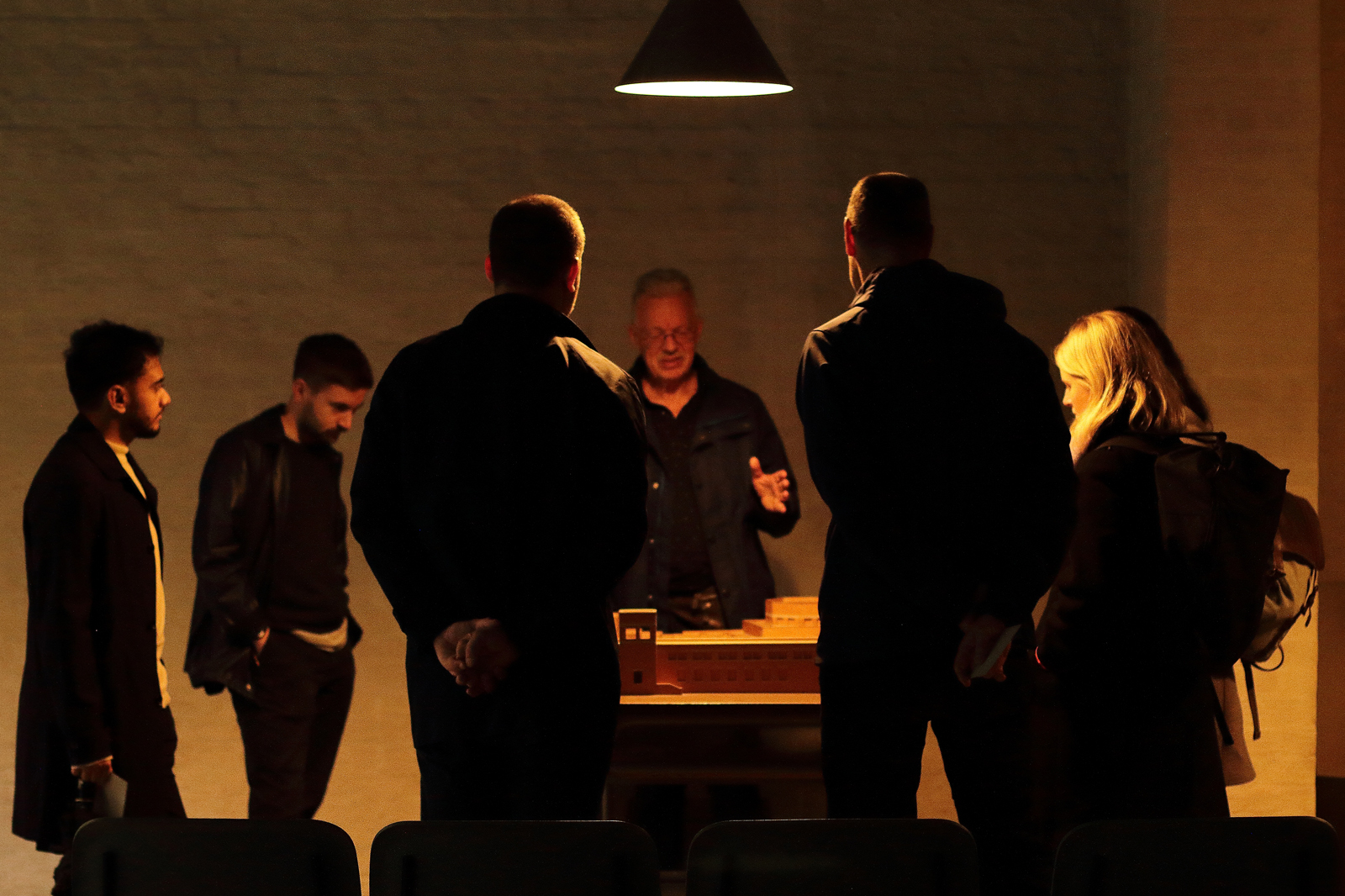