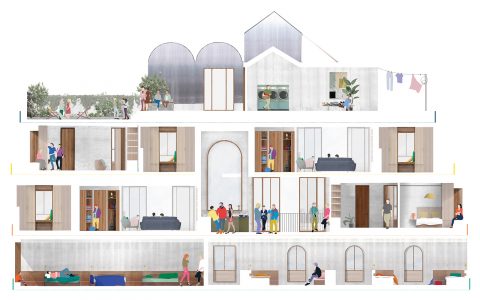 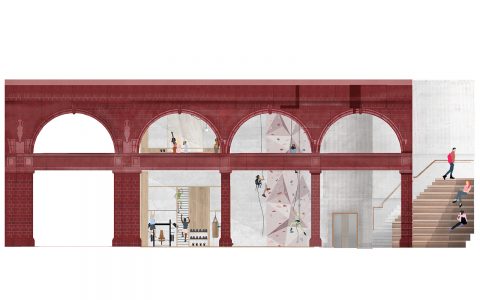 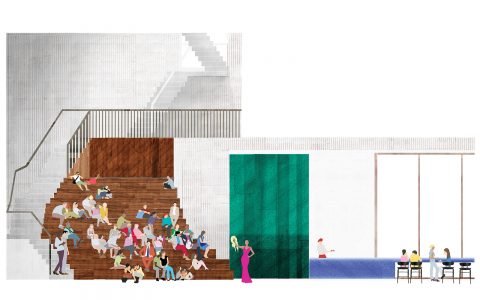 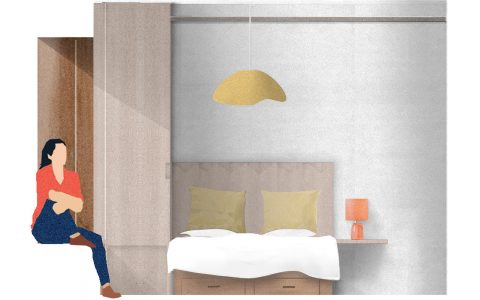 We have been shortlisted! Our entry for the New Horizon Youth Centre’s Hidden Homeless competition, Ho-Co, has made it through the initial cull and we now await the awards evening on Thursday 27th September where Jon Snow, the charity’s patron, will announce the winning scheme.

Supported by John Mcaslan and Partners and instigated by the New Horizon Youth Centre, a charity supporting young people in difficult situations, the competition called for ideas on how to make homeless shelter (including both short and medium-term accommodation) in central London a financially viable scheme by suggesting further contextually relevant programmes to support it. Our design combined the shelter with co-living space for renters as well as a gym, a generous lobby space (think National Theatre) and a rooftop garden shared by all residents including those only there for a short stay. An important aspect of our proposal was that the medium accommodation is identical to the co-living space so that it could not only be intermingled with the rented flats but also, should the venture be a success, the charity could claim back space for shelter.

For us, co-living and a commercial space were obvious choices, but the key to our proposal is how we recommend space should be organised. We banned corridors and established a hierarchy of rooms and ante-rooms that don’t differentiate between rich and poor but establish expanding networks of relationships between residents to instil confidence or allow solitude without enforcing it. This strata of spaces stretched from bedrooms with generous window seats (to allow solo contemplation); to ante chambers connecting 4 bedrooms and a bathroom with seating and more storage space (for chats in or collisions with small groups); to large living spaces shared by 8 people and zoned by level changes and built in furniture, to the circulation space which encouraged neighbourly interaction (again no corridors to disappear down); to a rooftop garden for hanging around or organised events; and finally the gym and lobby on the ground floor which allowed non-residents to interact with the building. The short-term shelter also follows a similar spatial strategy but with beds in the dormitory rather than rooms in flats.

Generosity of living space was very important to the scheme as our studies in to rented accommodation in Kings Cross (the prescribed site) revealed renters have to forgo living rooms to create an extra bedroom to be able to pay as little as £1000 per month (which is not little!). Our co-living/medium stay sheltered accommodation did not just provide larger living space but we suggested that floors could tesselate to create double height volumes, which would not normally be considered financially viable to developers but because of the spatial pool that co-living allows it could be possible. Ho-Co allows NHYC to become exemplar landlords/developers at the same time as helping young people in desperate need. It works with current rental figures on the developer’s end but provides a humane alternative on the tenant’s side.

We can’t wait to see what all the other practice’s who entered have come up with. Wish us luck!