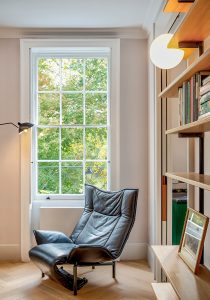 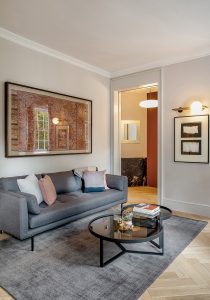 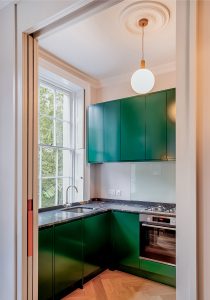 The refurbishment of Highbury Apartment, a two bedroom flat in a listed Georgian building in North London, has recently been completed. With views overlooking Highbury Fields, our renovation sought to extend this leafy outlook to as much of the flat as possible as well as restore grandeur to the listed space.

Dating back to the late 18th century, this Georgian property was originally built as a house and following the second world war, and a demand for more housing stock, the house was divided up to create a series of apartments. Since this division the first floor apartment has undergone a variety of unsympathetic refurbishments which have eradicated original proportions and mouldings meaning that the windows and shutters were the only historic elements still intact. Despite the lack of original features we were still required to seek Listed Building Consent for our scheme. We achieved this successfully.