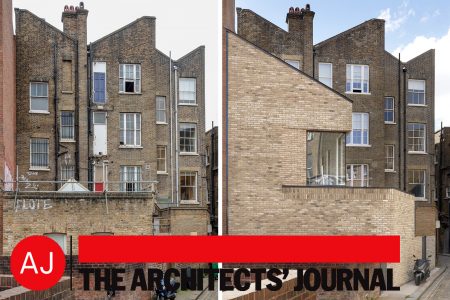 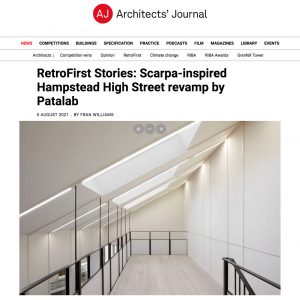 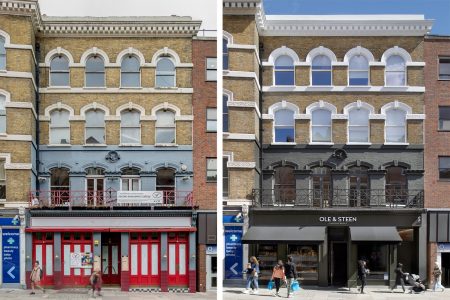 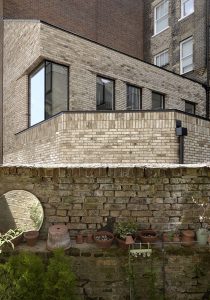 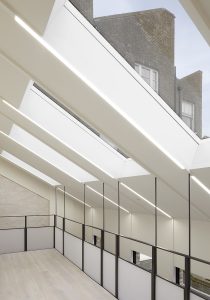 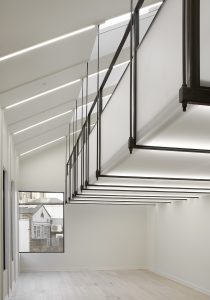 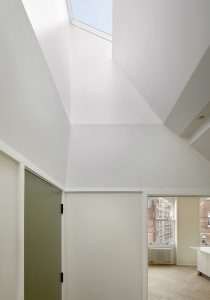 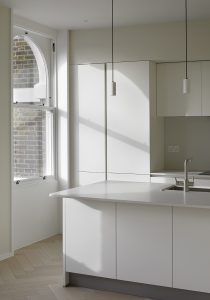 Patalab Architecture’s “The Bird in Hand” Hampstead refurbishment in north London has been published in the Architects’ Journal. The feature is part of the journal’s RetroFirst series looking at architects who give buildings a new lease of life. Simon James, associate architect at Patalab Architecture, talks to Fran Williams about the conversion.

Tell us about the scheme

The Bird in Hand, once a local watering hole of Hampstead until it changed hands to become The Dome café in the early 1980s and later a restaurant, is a five-storey Victorian structure, which included two flats to the upper floors, accessed via a rear external escape stair.

Our client’s brief called for the transformation and extension of the tired, inefficient building into a mixed-use scheme, with an ambition to create something unique. This Hampstead refurbishment has recently been completed into a pair of two-bedroom flats to the upper floors, offices on the first floor and flexible shop/restaurant spaces on the ground and basement floors.

Nestled between Hampstead High Street and Bird in Hand Yard, the building occupies a confined site, bound closely at the rear by tall residential terraces. Following analysis, a two-storey rear extension of limited volume was deemed most appropriate for the site. Spatial efficiency was crucial and this required, for example, a new helical staircase at the heart of the previously inefficiently arranged floorplate, together with developing and co-ordinating many bespoke details that maximise space while complying with regulations.

Working in collaboration with structural engineers Michael Hadi Associates, this approach was articulated elegantly through the evolution of the rear extension design. The resolution of the mezzanine support led to distributing the structural load through a series of 40mm-wide portal frames on which a series of suspension rods delicately poises the mezzanine level within the modest, mono-pitched volume.

What were the challenges of the existing building?

Maximising the efficiency of the confined existing site and floor plate to meet the requirements of the brief, without compromising on spatial quality. Introducing a new helical staircase in the centre of the floor plate was one of the key moves, which proved particularly challenging with respect to resolving the structural scheme within engineering and fabrication limitations to ensure the proposal worked with the building in the most spatially economical way possible.

Consequently, rather than remove existing historic riveted steels, which form the primary spine structure of the building, these were exposed and utilised to support the new stair at each landing level, thereby respecting and creating a direct link to the historical structure.

Despite extensive initial site investigations and research, working with existing buildings is seldom free of surprises during the construction process. Some are welcome surprises, such as historical layering of materials and artefacts, while others, such as unexpected ground conditions resulting in enlarged foundations, as was the case at The Bird in Hand Hampstead refurbishment are less so.

Working closely with the quantity surveyor and contractor, such unforeseen elements were negotiated through financial and programmatic buffers within the contract to mitigate delay and increased expense.

The mezzanine structure pushes the limits of each discipline involved. Encouraged by the refined proportions of the rear extension and mezzanine, this 40mm structural motif and materiality was echoed in the detailing of both the residential units and the new, waxed mild steel cantilevered staircase to the common area. Fabricated by Weber Industries and developed using a diverse range of traditional and contemporary design tools, the stair’s helical geometries and steel construction methods were also adopted to negotiate the generous floor to ceiling heights and challenging spatial constraints.

The solid balustrade from entrance level elegantly transitions into an open one at first floor level, gradually demarcating the change of occupancy as one ascends from office use to residential on the upper two floors.

Had demolition ever been considered?

As a practice we thrive in reanimating existing buildings. Through considered initial site investigations and historical analysis, key existing features and historically significant elements can be identified. These elements then play an important role in informing the proposed design approach in our projects. Complete demolition is therefore rarely considered, unless the anticipated extent of repair and refurbishment of an existing building is of such an extent that it proves much less sustainable to retain.

In this regard, at The Bird in Hand Hampstead refurbishment, the existing primary volume envelope and majority of the existing structure is retained, while only the non-original ground floor extension to the rear was demolished.

During the course of the project, it was exciting to uncover and selectively expose some of the historic layers. Lime slurry partly coats the existing rear elevation brick internally, for example, leaving traces of the historical openings on show and forming a palimpsest within the new extension, which echoes the historic butterfly roof geometry. As well as offering potentially more sustainable and resourceful construction solutions, such interventions demonstrate that working with existing buildings can offer an architectural and historical richness otherwise lost through demolition and new-build.

Aside from retaining elements of the original fabric, what other aspects of your design reduce the whole-life carbon impact of the building?

The project’s spatially economical approach also translated into a considered, material economy with a focus on quality and longevity. Fermacell partitions in lieu of British Gypsum where adopted, for example, thereby reducing the amount of material and space required by alleviating additional ply bracing on partitions, while ensuring robustness and fire resistance requirements are met. Elsewhere, co-ordination of bespoke details between ourselves, various consultants and building control mitigated both spatial and material waste as much as possible.

Flexibility was designed into the proposals wherever possible in anticipation of prospective occupants needs and with the aim of reducing resource-heavy future adaptations. Soft spots within the floor structure at first floor level were integrated into the structural design, for example, in order to facilitate linking the ground floor and first floor units in the future with relative ease.

Services were also discreetly integrated within the first-floor offices with enough flexibility to enable the prospective occupants to utilise the space in an open plan layout, or partitioned into several spaces, without the need to make complex and destructive alterations.

Naturally, a fabric first approach was adopted when developing the proposals. Consequently, the existing thermal performance of the building, previously devoid of any insulation, was significantly improved through replacement double-glazed timber windows, high-performance insulation and considered detailing throughout. 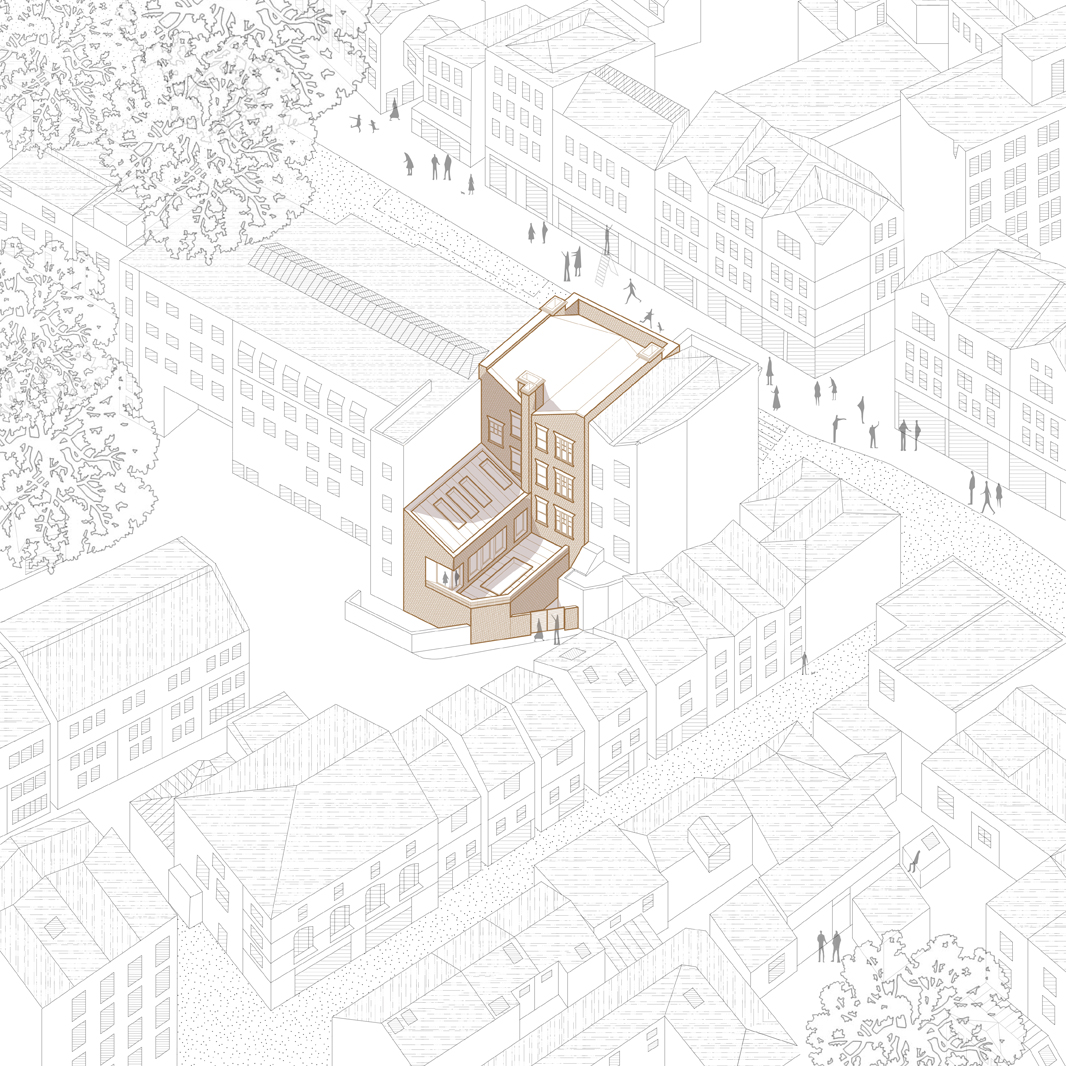 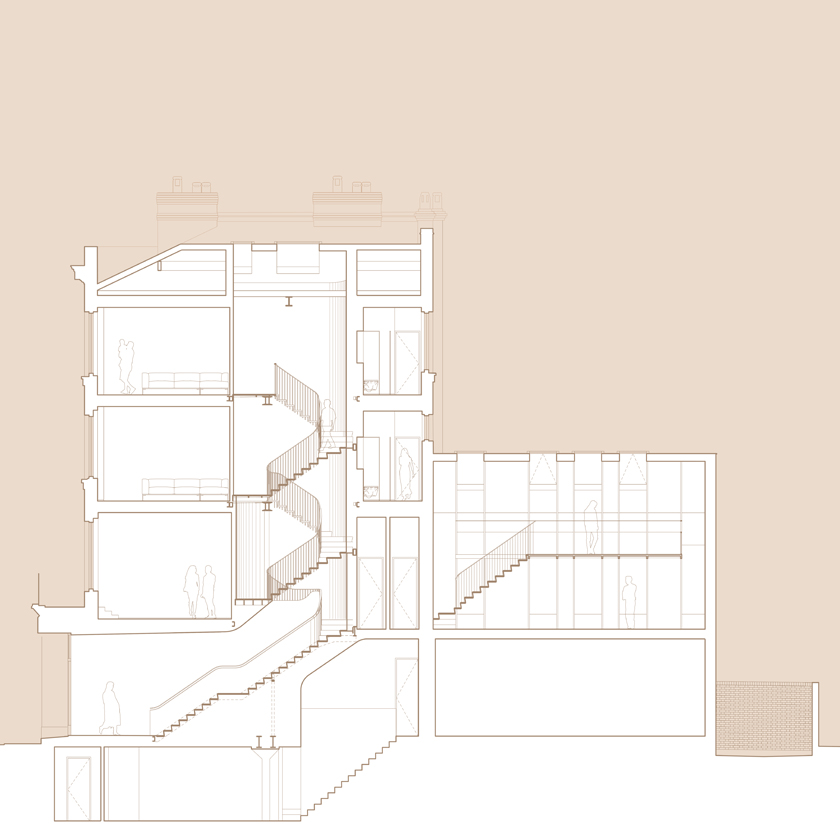 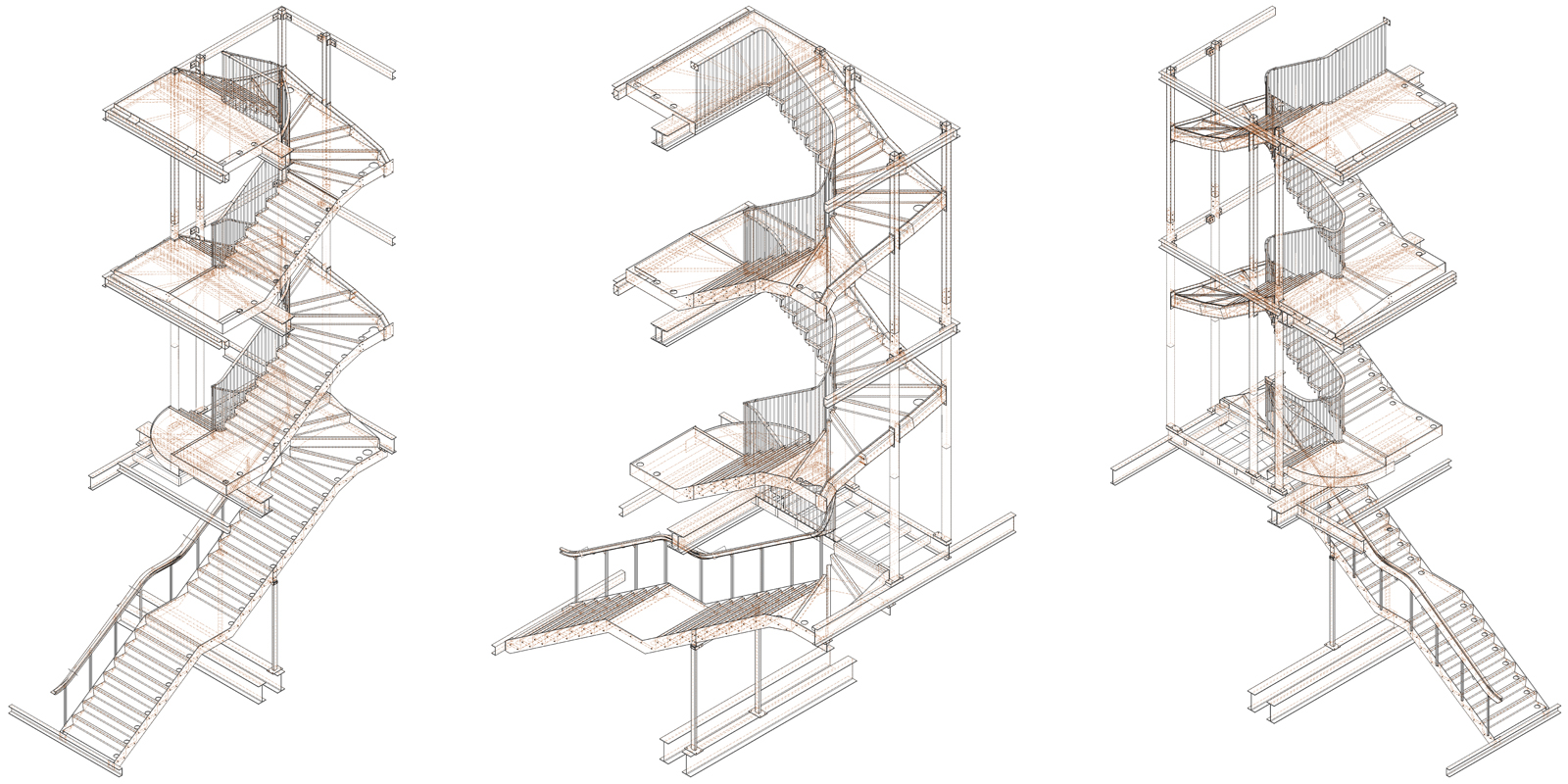 Before and after: rear facade 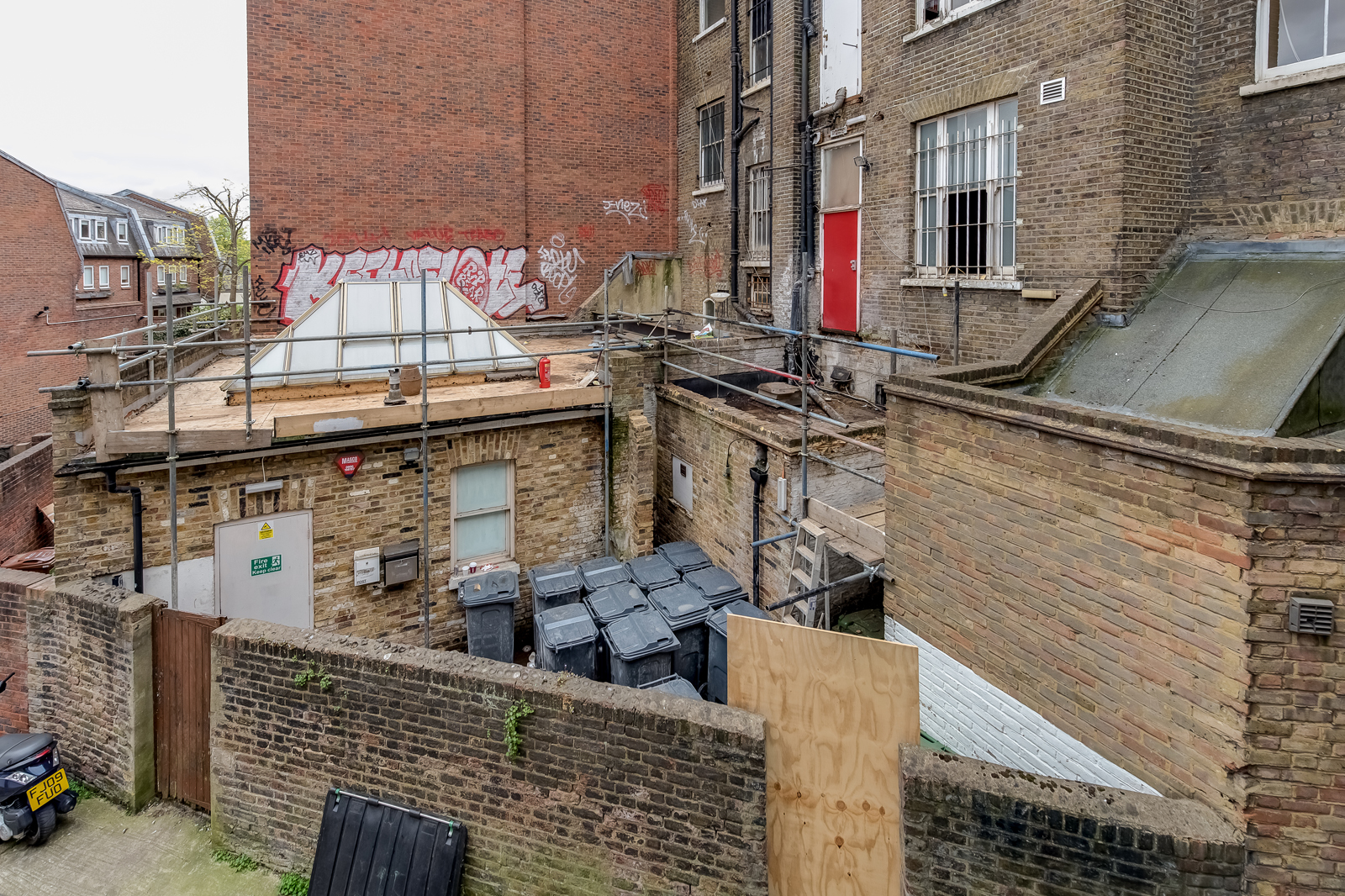 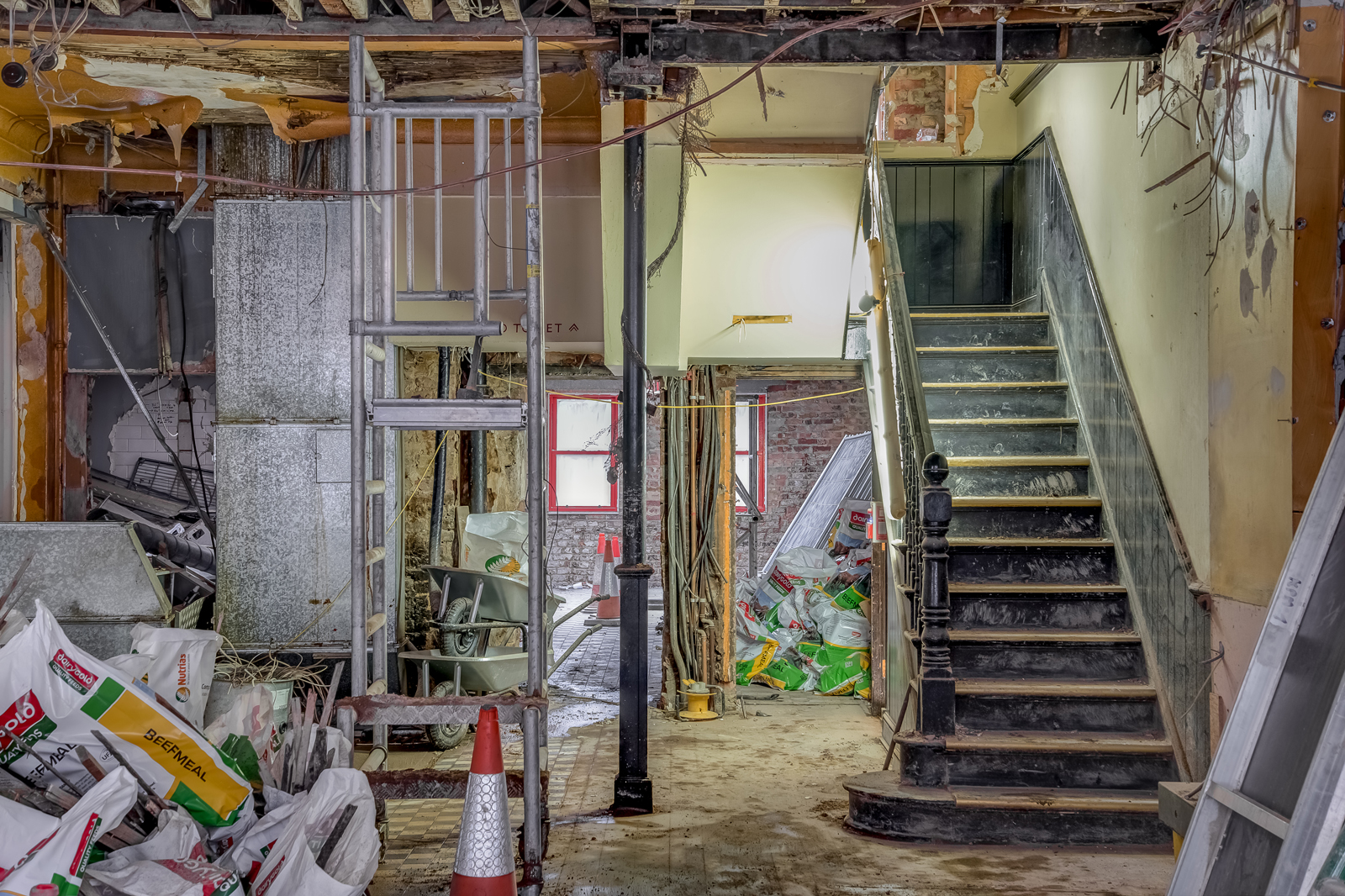 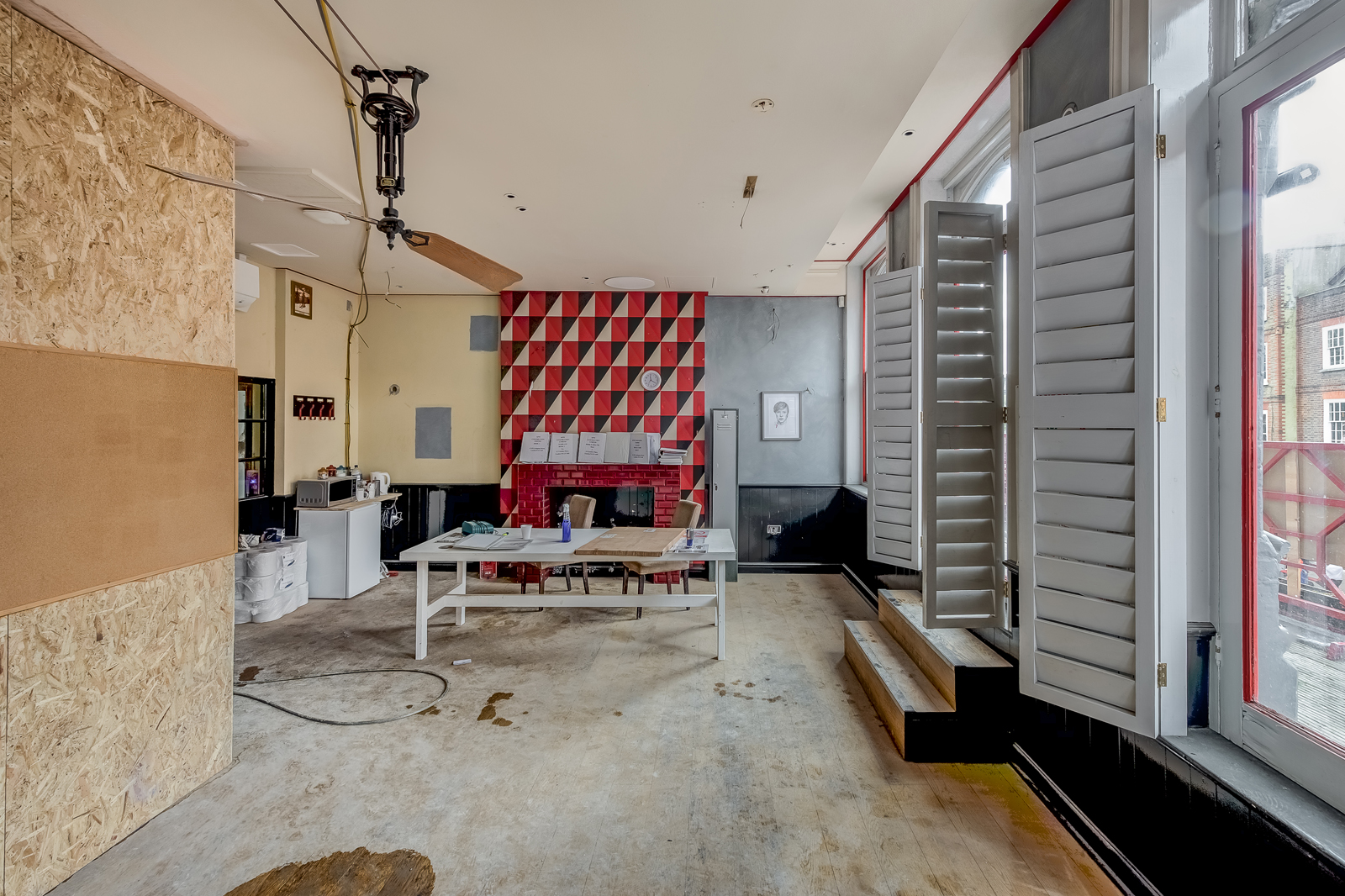 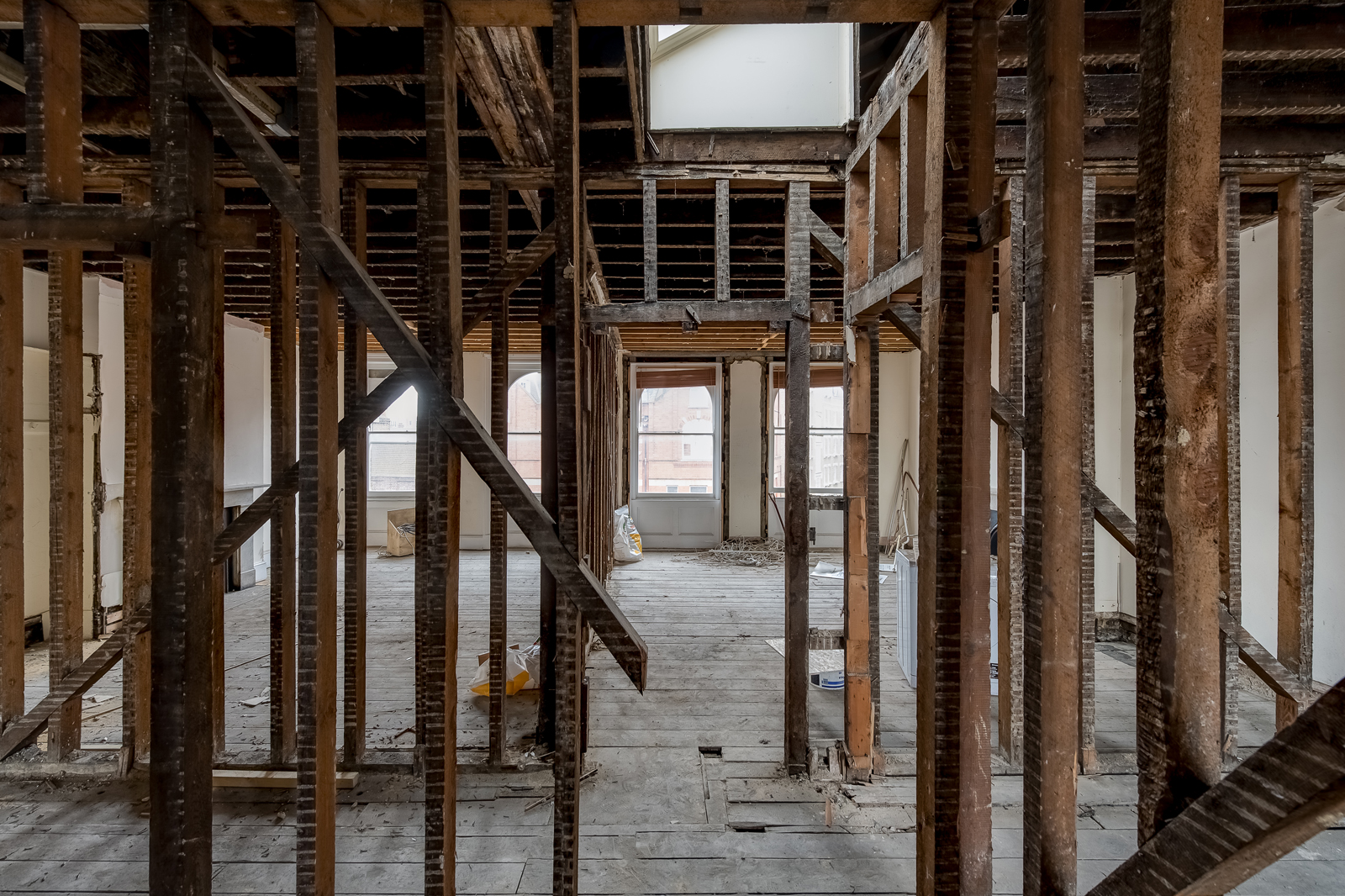 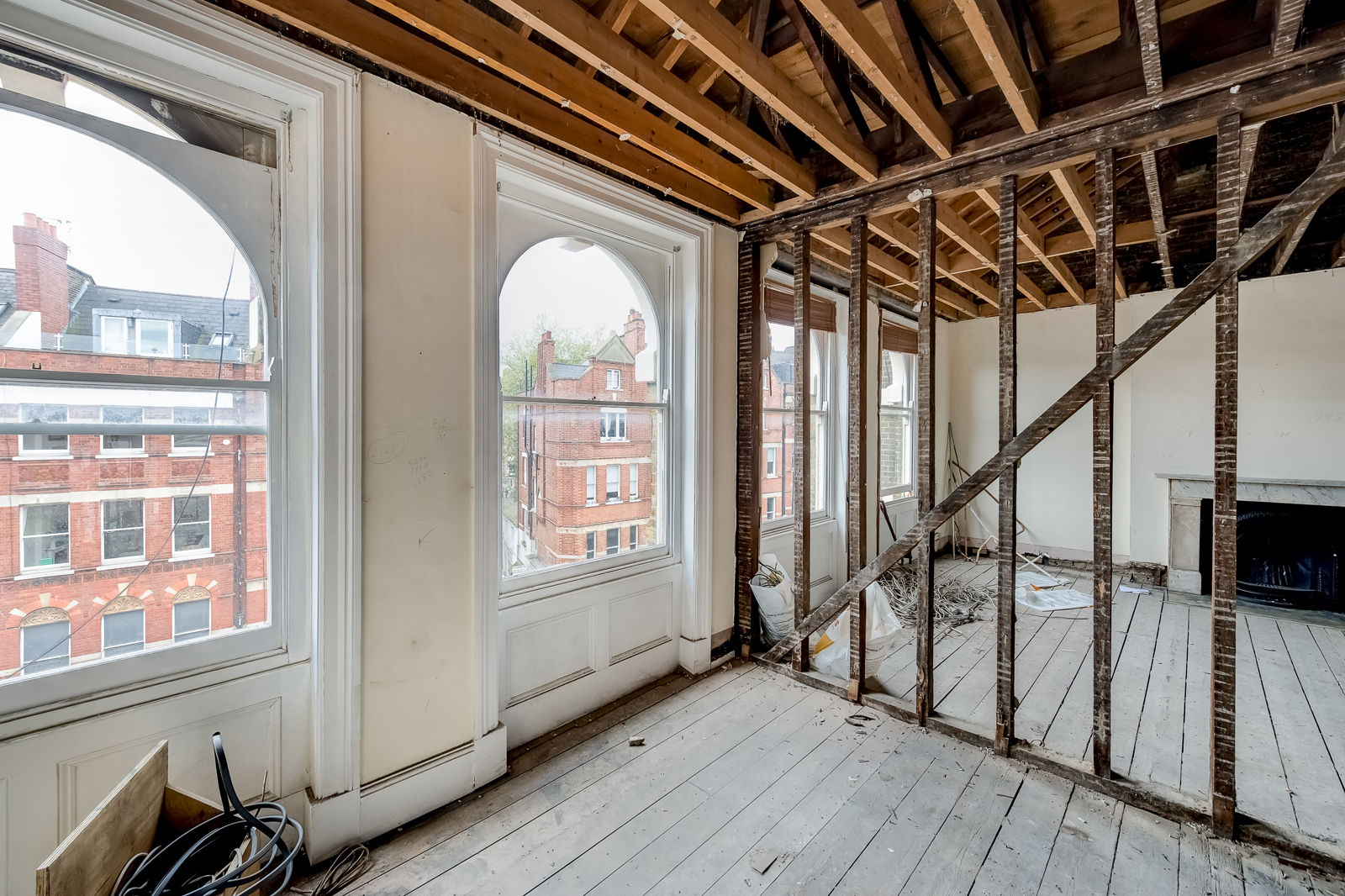 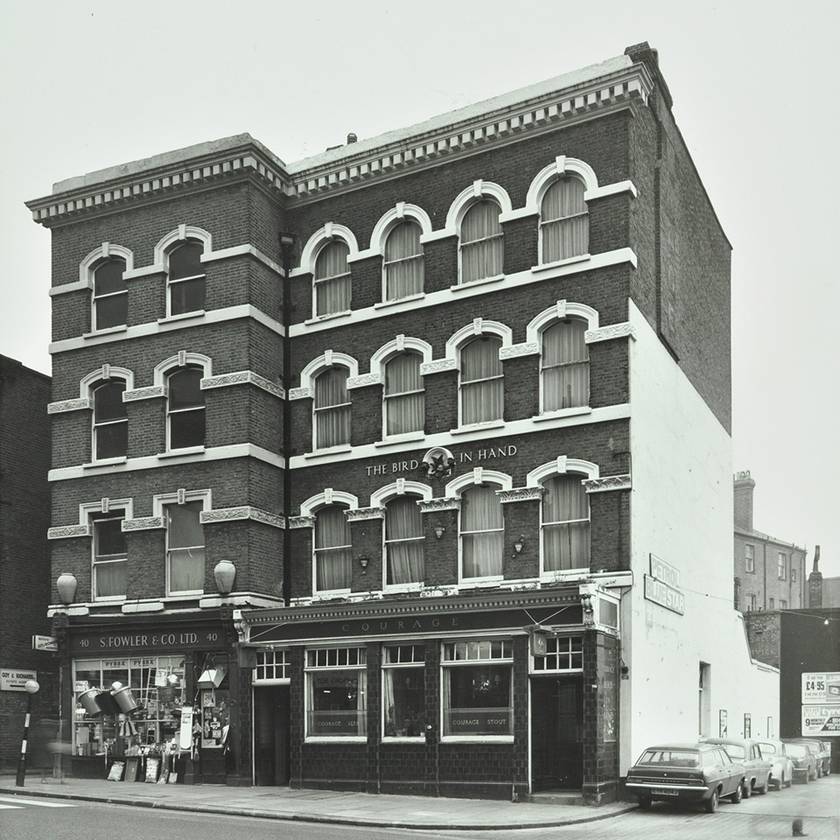 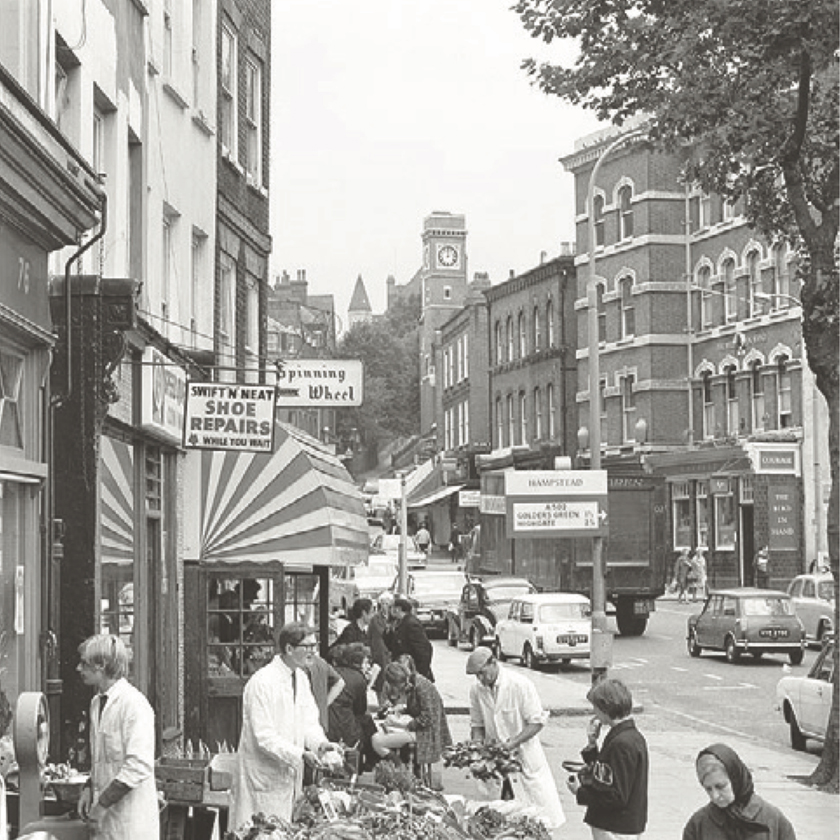