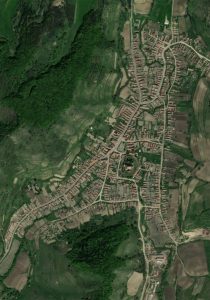 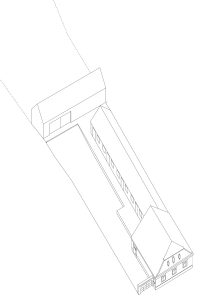 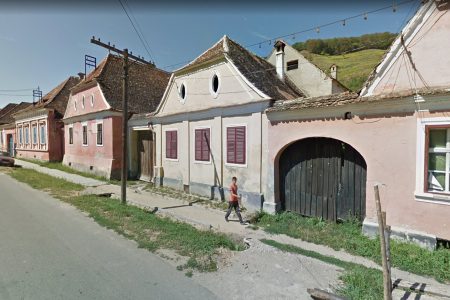 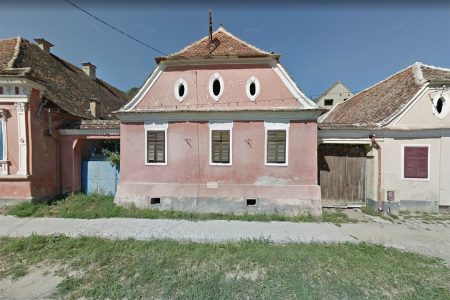 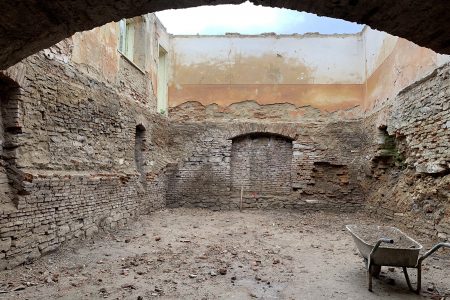 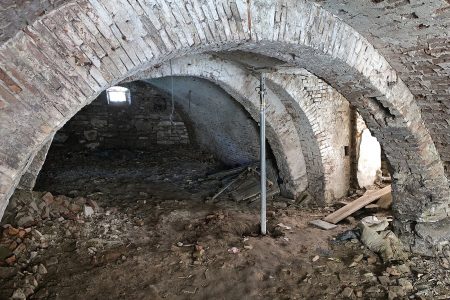 Patalab have worked many times beyond the borders of London and Berlin (where our offices are based), however this project presented our first opportunity to work in Romania.

The site is a traditional Transylvanian farmhouse in Biertan, which is one of seven Saxon villages in Southern Transylvania listed as a UNESCO World Heritage Site. These villages have earned their listing through the preservation of medieval land-use, settlement and building typology. Aerial views demonstrate this protected condition - long and narrow properties are horizontally stacked along the primary road that winds through the centre of the valley, with a public square and fortified church towards the centre of the settlement. The church would have originally provided protection from Ottoman invasions whilst each individual property would have served as a farm to process the produce of the hillside behind.

Zoom into the aerial view and the regular organisation of the rural live/work typology of the Transylvanian farmhouse is evident. Positioned tight to the boundary, the larger building overlooks the road whilst smaller buildings extend to the rear along the north side of the plot facing a courtyard to the south. By switching from aerial image to street view, more specific characteristics of the village are uncovered. Farmhouses with symmetrical elevations in pastel-coloured render, painted timber shutters and speckled orange roof tiles line the streets. Typically, there is no separate entrance to the house; access can only be gained via the courtyard that is entered through large gates to the side of the house. Adding to this sense of separation, ground floor windows are elevated above street level (due to the half-submerged basement below) reducing interaction between public and private space. The formality of the facade and a large closed gate allows each property to curate its public appearance - colours selected, ornate decoration applied, no sign of strenuous and messy farm work in town.

This detachment may have once established public presentation, however, in recent years as there has been no human life within the domestic fortification, weeds have quietly taken over. This was until the current owners, our clients, bought the property a few years ago and since then they have already started works to transform the Saxon farmstead into their dream holiday home.

With a new spatial programme for the existing farmhouse decided and the creation of a sunken courtyard (by removing an outbuilding to expose what was once basement below), Patalab have been appointed to produce the concept design for the basement living space and courtyard, external and internal staircases and rear elevation of the farmhouse.

Alongside discussions with the client we have developed our design through drawing existing conditions - irregular brick walls, vaulted lintels and niches, the purpose of which remains unknown. This approach has led us to propose interventions that are both sympathetic with and distinct to existing fabric. We feel that the new should be obvious and serve to subtly enhance historic features.

Both complimenting and contrasting with the existing crooked and rounded brickwork that forms the walls and vaulted ceiling of the basement, our design proposes new sharp and uniform brick to be used as flooring/paving. This restricted material palette means that there is no brash distinction between surface materials, whilst the formal differences of the new and old materials are accentuated. Colour tones are similar creating a harmonious relationship but the existing and intervention have their own characters which allows the existing to be as much of a feature as the intervention - the historic curved ceiling is no longer a structural necessity to raise the ground floor, it is reconsidered as a spatial and decorative element of the lower ground living space.

The modern brick is a humble and honest material addition to the space that is elevated by the complexity of its treatment. Rising out of the regimented brick paving, plinths are formed - bricks stacked on top of each other create raised areas, furniture and walls and reinforcing this spatial hard-wiring, the flooring also changes orientation to establish three different zones. Towards the rear of the courtyard, the brick rises to form the beginning of the staircase and a bench where cups of coffee can be enjoyed in the morning sun or plant pots positioned. In a section between this zone and the kitchen is the lounging area which provides seating (to be softened with cushions) where, to one end it acts as a window seat, and to the other it also forms a raised area on top of which is positioned a wood-burning stove. Finally, extending from the rear zone to the front of the basement is the kitchen and dining space, which includes a planter to cultivate herbs to be cooked with in the long-vaulted kitchen and then devoured at the table.

These plinths also form the bases for internal and external staircases, anchoring these elements back to the ground and allowing the upper portions of the staircases to feel lighter and more sculptural. Unlike the brick flooring, we see these staircases as appearing distinct from the rest of the house - they openly express the new purpose of the building and celebrate its transformation from derelict farmhouse to a lively holiday home. Suspended within enlarged openings that allow more natural light in to the basement, the staircases traverse levels unapologetically and highlight how the basement would traditionally never been connected to the sleeping area or a sunken courtyard for alfresco drinks and dinner would never have even existed. By highlighting new features, the original is revealed and preserved.

Travelling next to the rear facade the sweeping internal staircase can be glimpsed through new large windows inserted into the existing elevation. Originally the extent of this wall would have been obstructed by an outhouse, however, as this has now been removed a symmetrical gable end is uncovered. The ghost of the outbuilding haunts the elevation leaving a patch of exposed brick that was once internal on the largely rendered wall. Our design retains this palimpsest, coating the brickwork to give it a muted and neutral colour and repairing and repainting the existing render. Shutters provide privacy to the large window openings when desired, but left uncovered, they enable the interior to enjoy as much of the hillside as possible.

Dialogue Between Existing Material and New Use

Whilst the public-facing aspects of this house will honour the traditional by being restored and repaired, the private will have its own unique character. Within its walls, a dialogue ensues between the existing material and the new use.

With a neutral palette, increased day lighting and sculptural forms, this Transylvanian farmhouse will be transformed into a tranquil holiday house, providing a place for restful breaks but also create the perfect backdrop for parties and get-togethers. 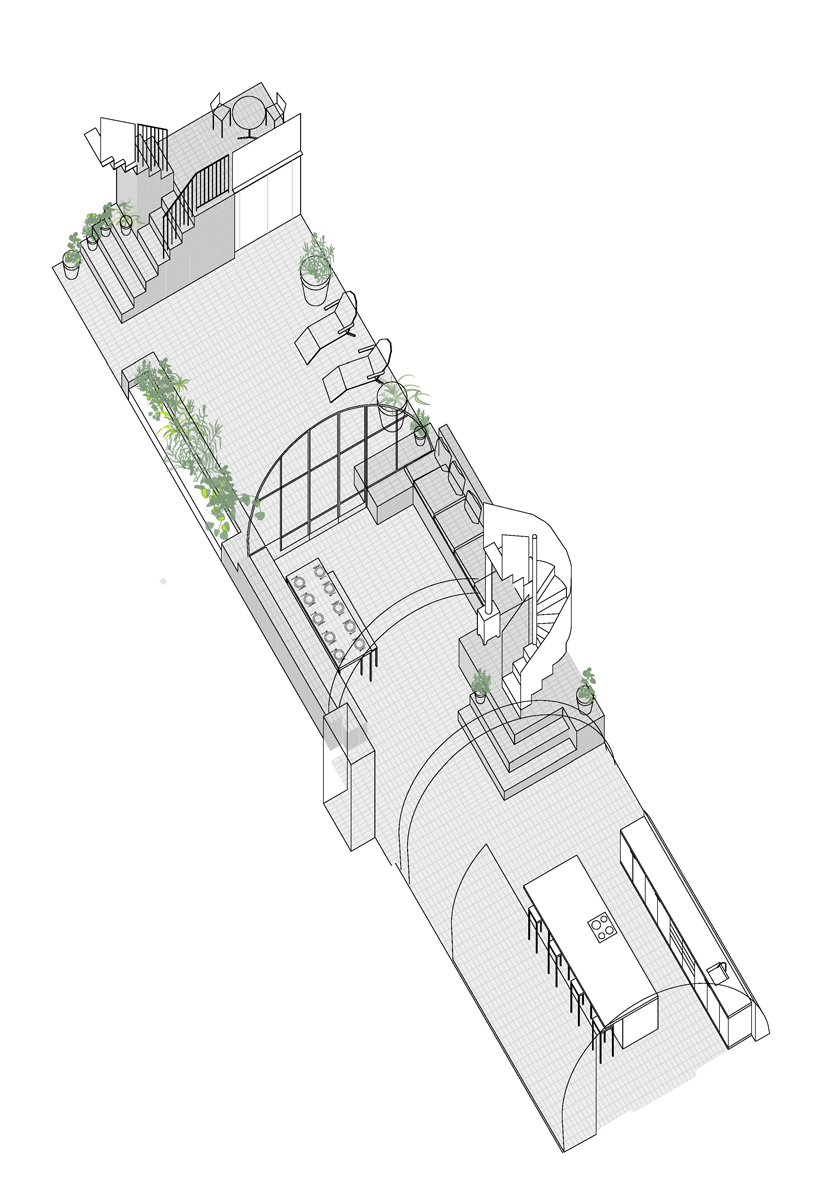 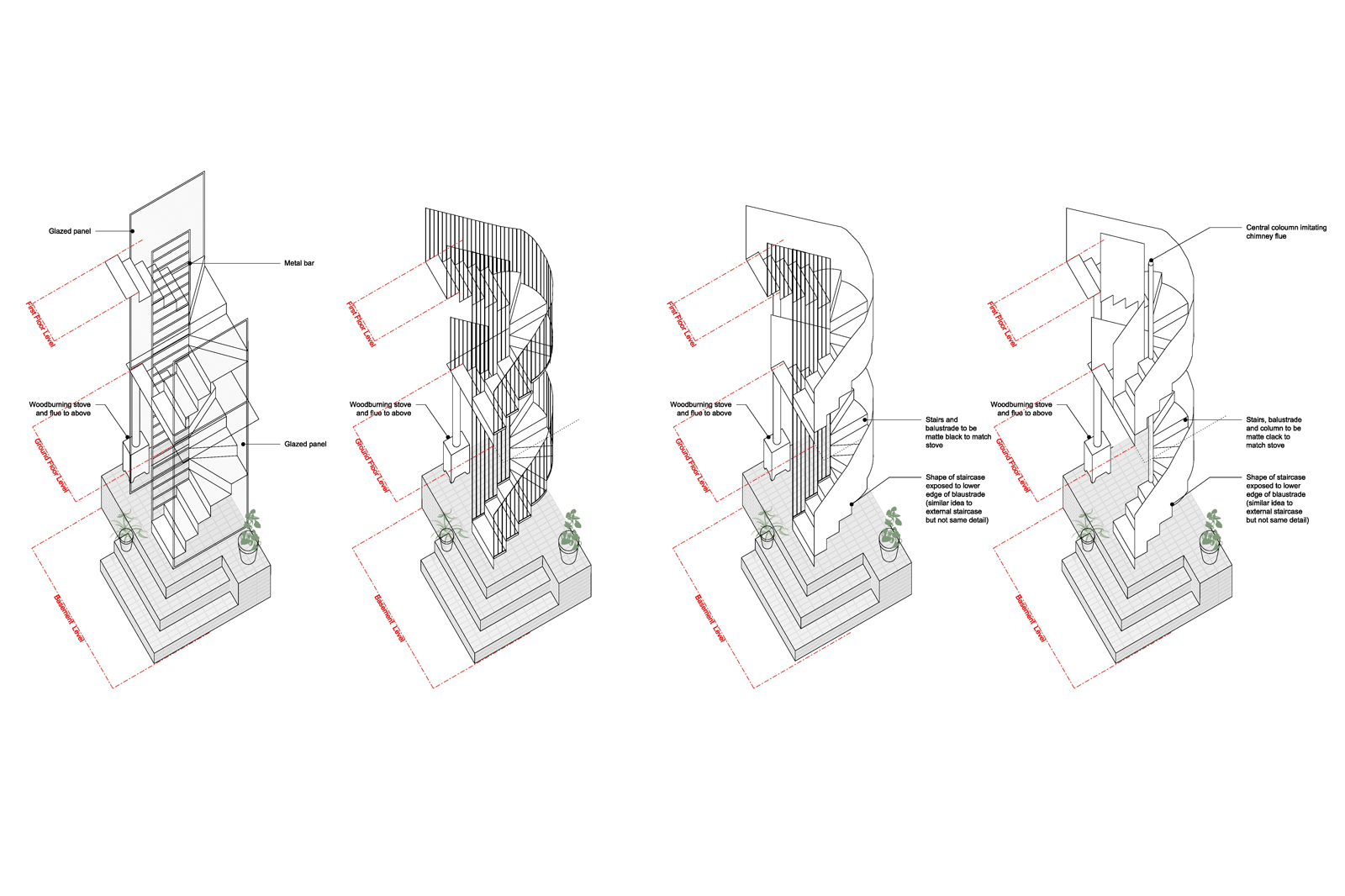 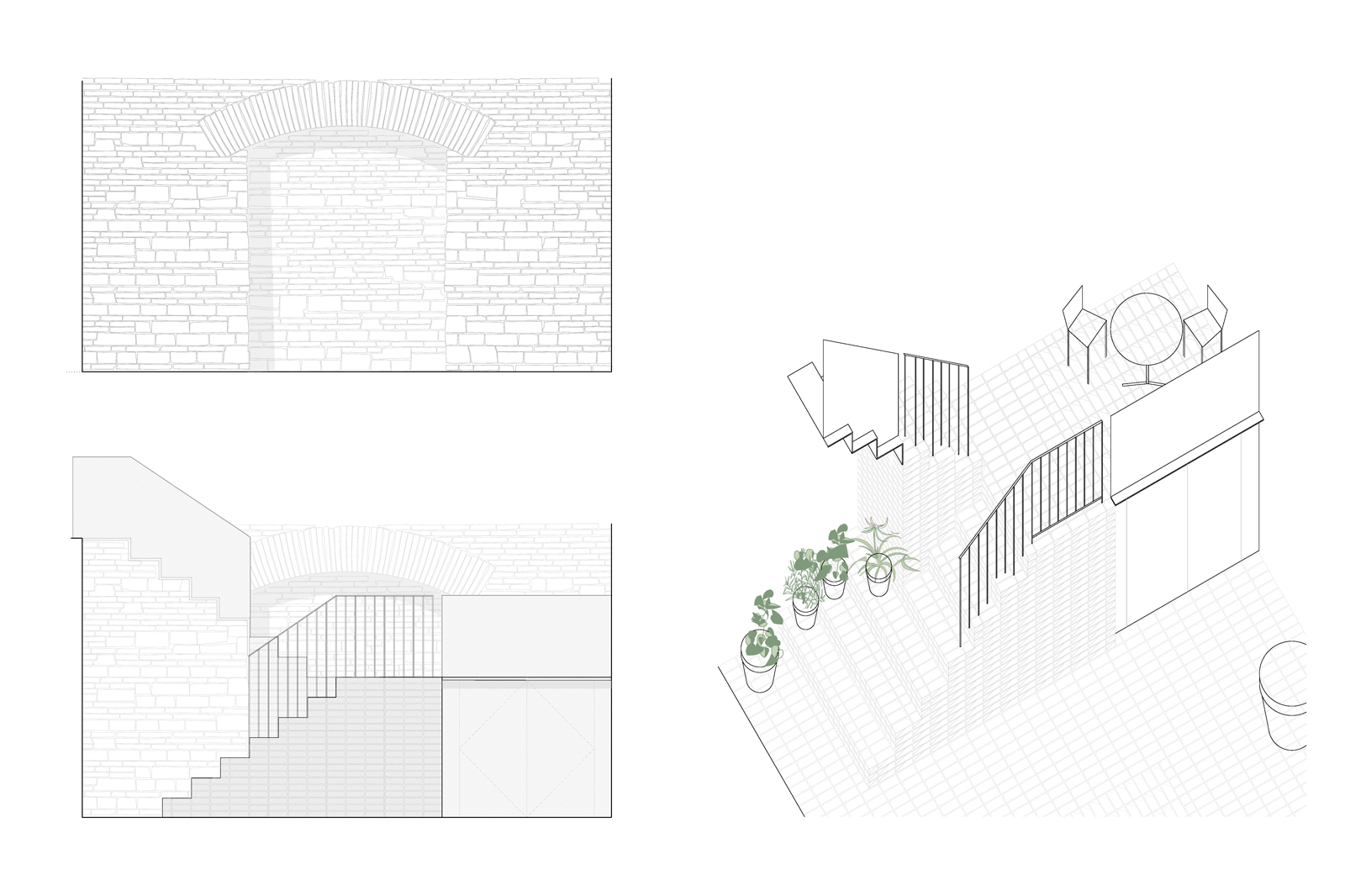 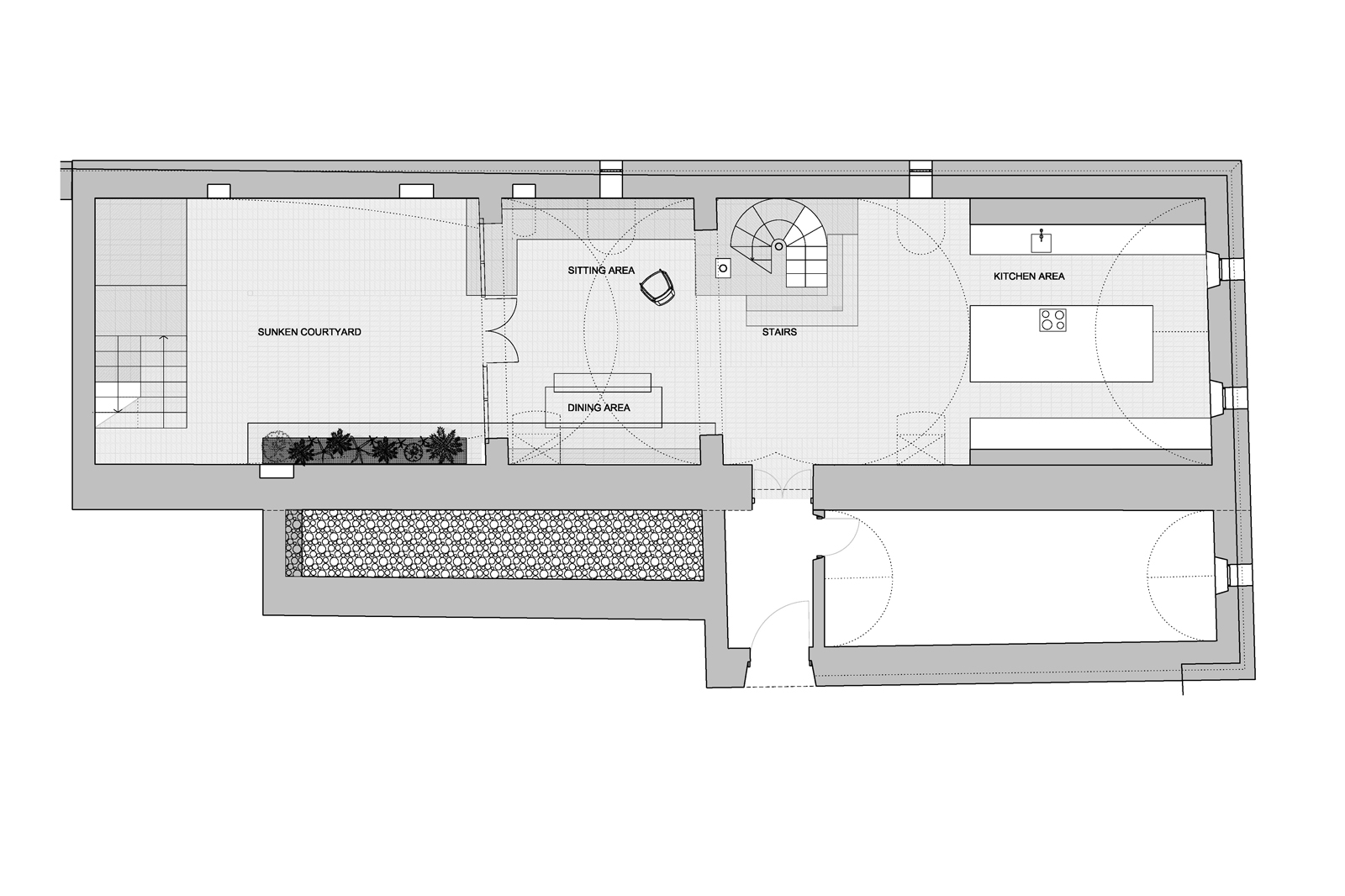 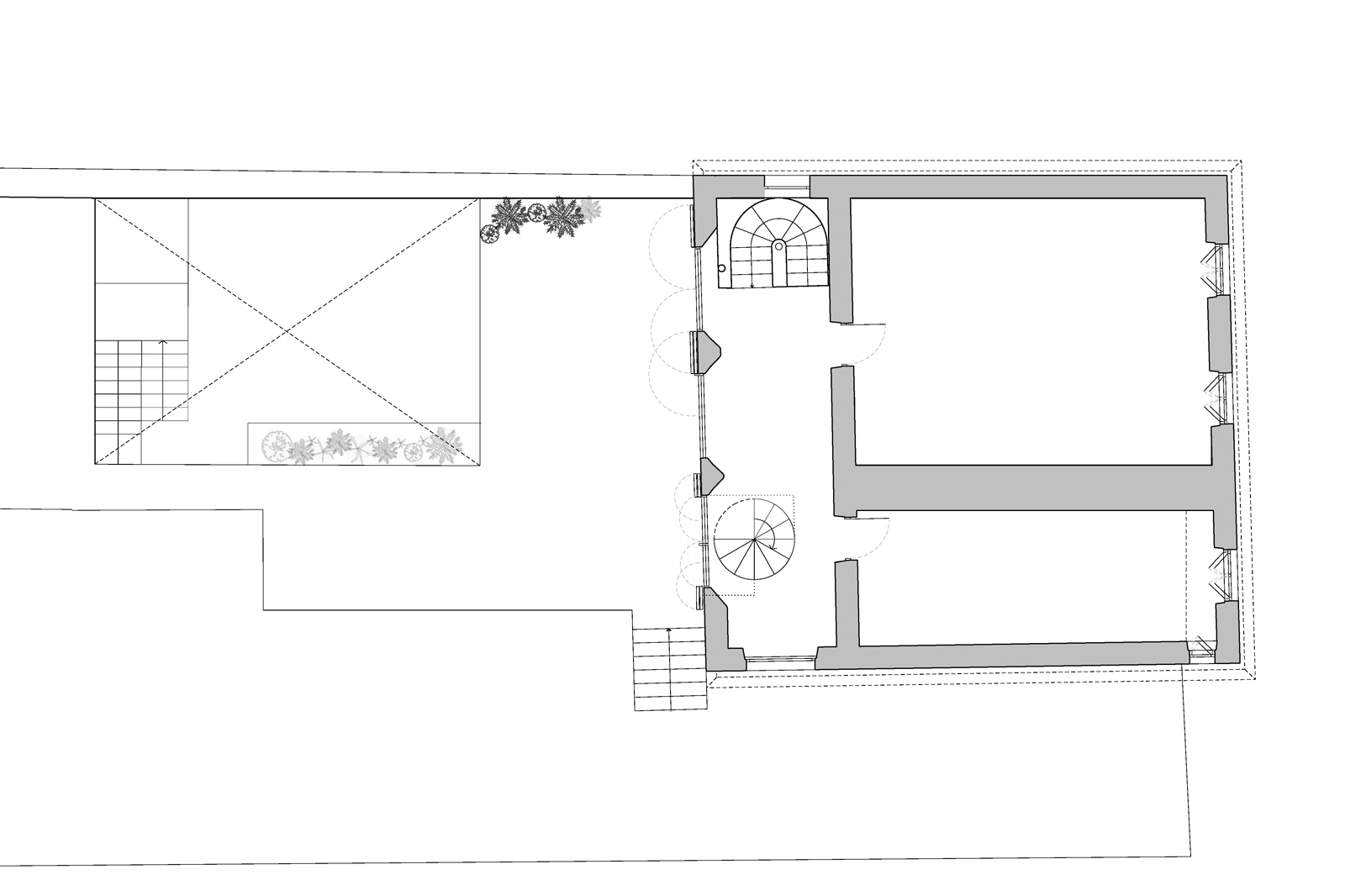 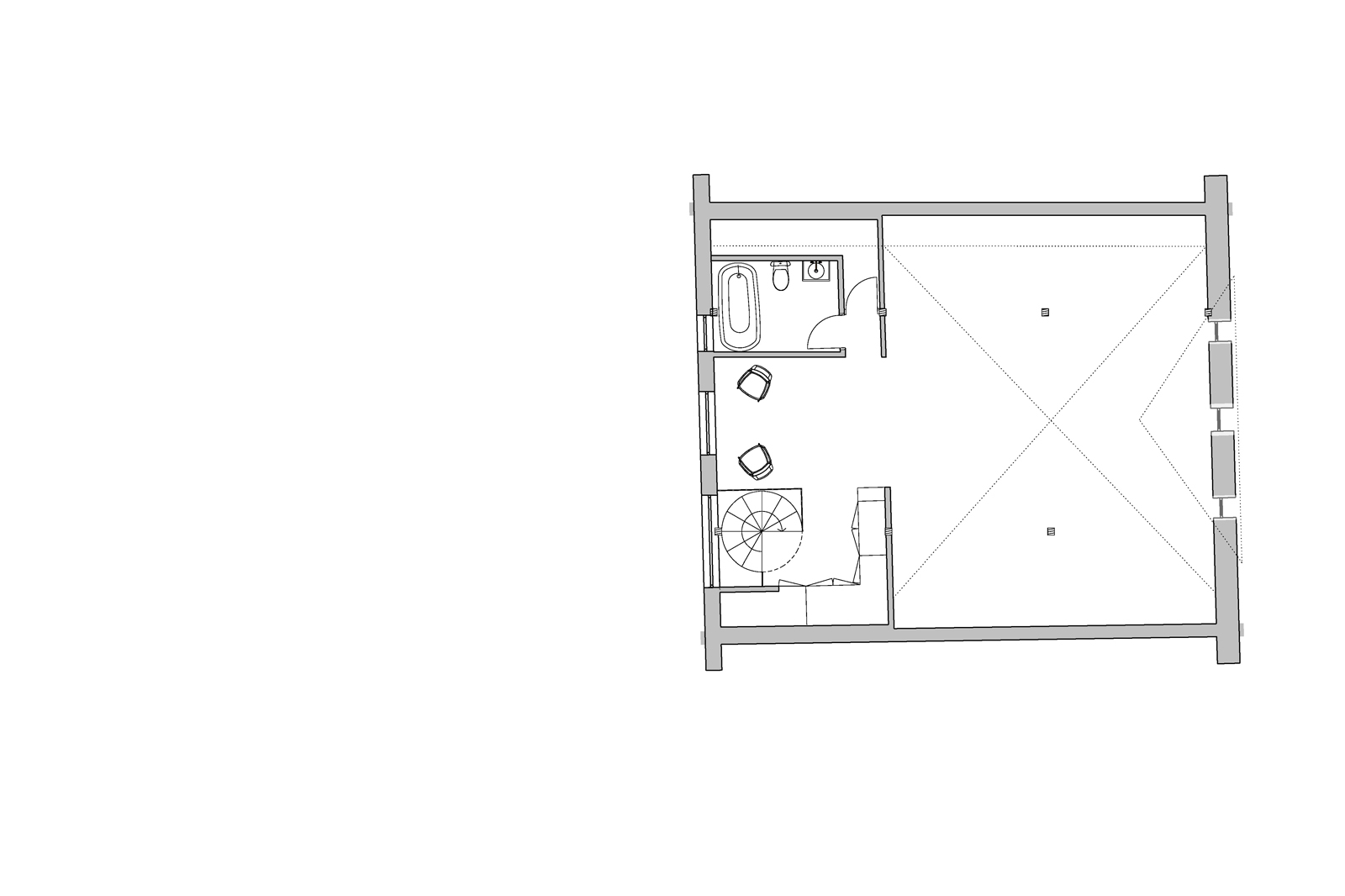 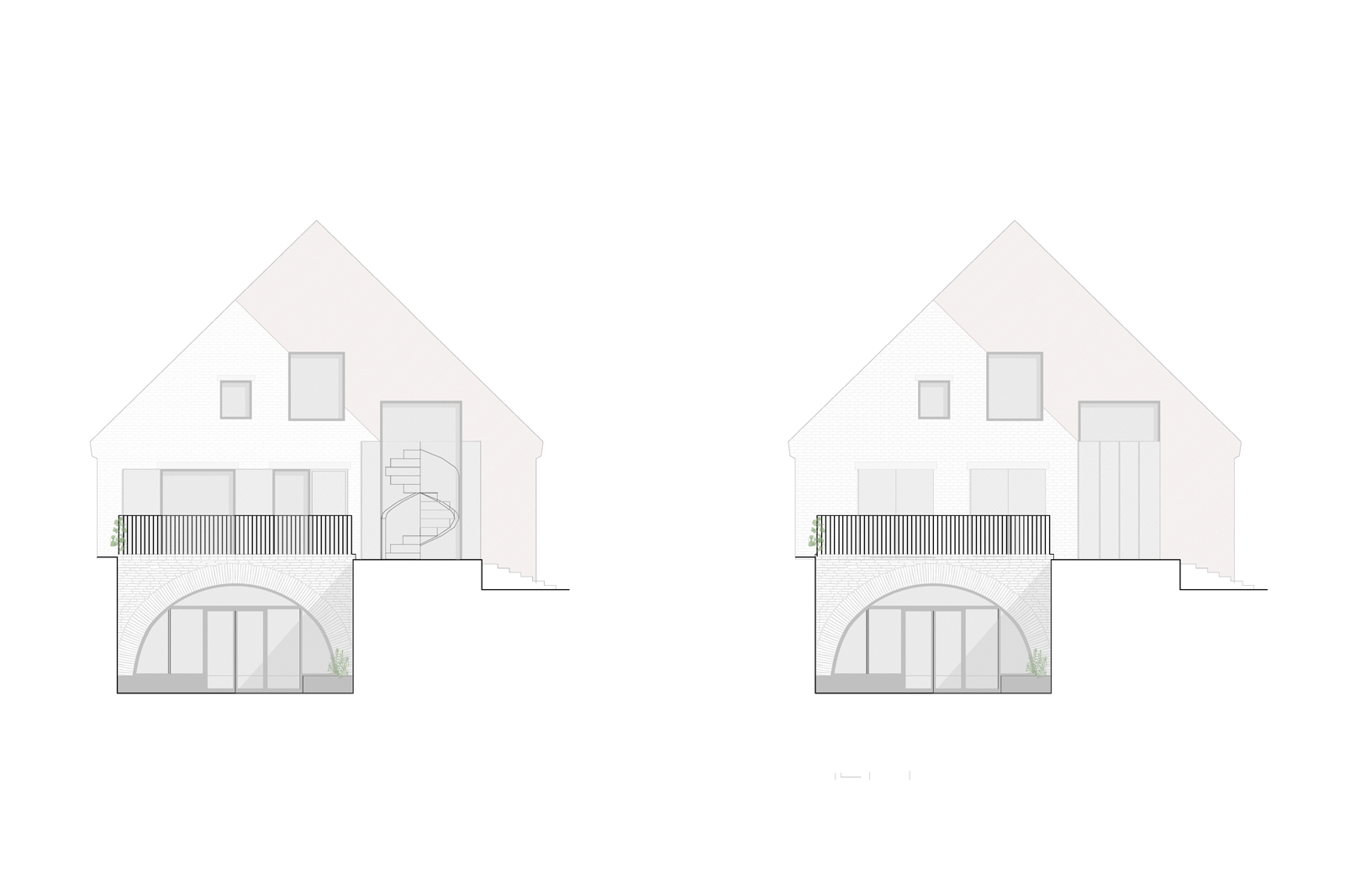